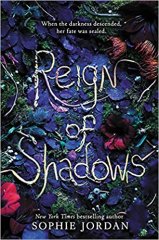 Seventeen years ago, an eclipse cloaked the kingdom of Relhok in perpetual darkness. In the chaos, an evil chancellor murdered the king and queen and seized their throne. Luna, Relhok’s lost princess, has been hiding in a tower ever since. Luna’s survival depends

on the world believing she is dead.

But that doesn’t stop Luna from wanting more. When she meets Fowler, a mysterious archer braving the woods outside her tower, Luna is drawn to him despite the risk. When the tower is attacked, Luna and Fowler escape together. But this world of darkness is more treacherous than Luna ever realized.

With every threat stacked against them, Luna and Fowler find solace in each other. But with secrets still unspoken between them, falling in love might be their most dangerous journey yet. 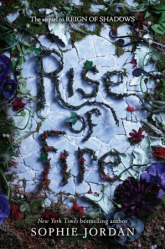 Luna and Fowler have escaped the kingdom of Relhok, but they haven’t escaped the darkness. When a battle against the dark dwellers mortally injures Fowler, Luna is

faced with a choice: put their fate in the hands of mysterious strangers or risk losing Fowler forever.

Desperate to keep the one bright part of her life alive, Luna accepts the help of soldiers from a nearby kingdom. Lagonia’s castle offers reprieve from the dangerous outside world—until the King discovers both Fowler and Luna’s true ties to Relhok and their influence over the throne.

Now pawns in each kingdom’s political game, Luna and Fowler are more determined than ever to escape and build the life they’ve been dreaming of. But their own pasts have a tight hold on their hearts and their destinies. Luna must embrace the darkness and fire within her before she loses not only Fowler but the power she was destined to inherit.

*I’ve decided to combine my reviews for this duology since the books are so short, and since I read them right after on another, all my thoughts are jumbled on the story as a whole.

Somewhere I saw this book being marketed as a Rapunzel retelling/adaptation – which led me to have certain expectations. Sadly those expectations weren’t met.

I really enjoyed the first book Reign of Shadows. It felt fresh and new and the heroine seemed to break the mold of the typical YA heroines that are in the majority of the books. Right from the start Luna is the one saving people – *cough* Fowler *cough* – and she seems sure of herself, not intimidated or scared. She is fully capable of handling herself and taking care of herself in a world that is unforgiving to the vast majority of it’s inhabitants. If you aren’t walled up in fortified cities, then you most likely won’t make it very long in the world.

While I liked Luna’s character, I liked Fowler’s so much more. It was easy for me to see that he wasn’t this selfish guy that he made himself out to be. He put on a front. As much as he complained about helping others, and as much as he contemplated leaving them behind, he never did. He was selfless.

While I enjoyed book one, book two, Rise of Fire fell so, so, so, so short for me. I was not impressed at all with this book. Both books are short, quick reads, which is nice, but book two felt like a shadow of what book one was. It was so fast, and things just kept happening without rhyme or reason.

This time around the biggest difference was that I didn’t like Luna at all. I felt like her blindness was a weakness in this book, whereas in book one it was one of her biggest strengths. I felt like so much was missing from this book. The relationship between Luna and Fowler was robotic and strange, and suddenly they are willing to basically die for each other. And then there was the weird love triangle mess with them stuck in the middle of it. It just didn’t feel as original as the first book did.

Now, the ending, easily the worst part of this whole book. It was random in the sense that it was WAY too easy. It felt rushed, and hurried, and to be honest, a little bit like a rip off. It’s not even explained! Nothing in this world is really explained, other than ‘this (the eclipse) as happened before, and ended before, so we just have to wait it out’. I hate to say it, but it kind of felt like the author didn’t know how to end it, or lost the story so she just made it convenient, and voila! the book is over.

In summary, I really enjoyed the first book, but was left so utterly disappointed with the second.

Are they a bad duology? No, they aren’t, they just weren’t for me.