I still haven’t finished a book, so I’m going to talk about National Novel Writing Month (NaNoWriMo), even though it’s February.

NaNoWriMo being a free event/challenge in the month of November where the goal is to write 50,000 words in 30 days. That equals to about 1,700 words per day, rounded up slightly.

I was in a writing class (Advanced Composition), and my teacher told the class that we needed to at least try and participate. For those of us who did, there would be potential extra credit or something (it was a long time ago, I don’t remember the specifics). So I, along with some other classmates decided that we would participate.

I come in on day one, and everyone has hit their mark, of 1,700 or more…I didn’t. When my teacher calculated the percentages done, I was at like .010% completed – some low number, and then my teacher challenged me to catch up. Out of all the people who started NaNoWriMo, I was one of a handful who actually completed.

The story I wrote was utter shit. So bad. Complete trash. I don’t know how I completed it though. After about a week and a half, writers block hit me hard. It basically punched me in the face, and kept punching me in the face for two weeks. NaNoWriMo is only four weeks long, give or take. Nothing I did shook off the writer’s block. I wrote everyday, but it was as painful as pulling teeth, so I stopped and had to wait for it to pass. Usually I can push past writer’s block, by just writing whatever comes to mind, but that time, nothing worked.

I was left scrambling in the last five days. Somehow I managed to write 25,000 words in those last five days, and submitted the story two minutes before midnight. I swore that I would never get that behind again, and so far I haven’t.

Now that I’ve given you the nightmare that was my first experience with NaNoWriMo, let’s take a little walk through all the projects I’ve worked on since 2011. Some of them I’m still very passionate about, while others I’m not.

The 2011 story was about a girl who gets sent back to ancient Rome. That’s all I legitimately remember about the story. And it sucked, so I wiped it from my mind.

In 2012 I wrote the second book to the SF Dystopian that I’m still currently working on. I had a completed draft of Book 1 at the time, and decided to use NaNoWriMo as a way to write book 2. Since Book 1 (Destiny) has changed so much since 2012, book 2 is no longer relevant at all, so it will forever be the way it is.

In 2013 I dove into a fantasy that had been pounding in my head since that March. I had gone to a writing workshop hosted by Sarah J Maas, Susan Dennard, Erin Bowman, Kat Zhang, and an appearance by Jodi Meadows. During the writing workshop we did an exercise that involved 3 die, and each of those dice had multiple images on them and we had to write a brief story using those three images.

I can’t remember exactly what the images were anymore, but they gave me this idea for a story. What if a world existed where in a battle between good versus bad, bad won? For months I had these two characters, Katie and Beau, who later became Killian, pounding in my head, screaming at me to write their story. So I created this world where bad ruled, and the only sourc 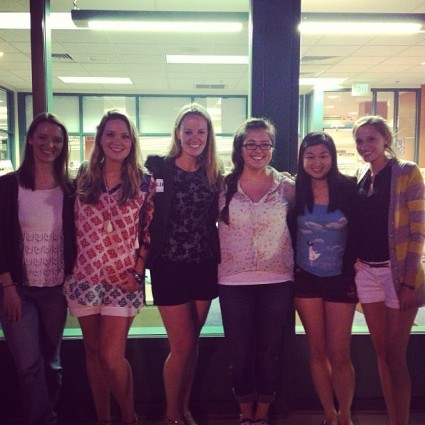 e of good, of light, remaining in the world was Killian. I’m still really passionate about this project, and have worked on it here and there since 2013.

I’m not gonna lie, my 2014 project was definitely inspired by the romance between Serena (Sailor Moon) and Darian (Tuxedo Mask).

Serena and Kai, friends since before they could walk, hold the key to beating back the darkness that hangs at the edge of the universe. Sent there millennia ago, Astoria wants revenge on the people who put her there.

Serena and Kai must learn to use the  magic given to them by the prophecy that has foretold of this battle.

This is a project I haven’t really touched since writing it in 2014, but it is the whole story from beginning to end, in a very rough, unfluffed way. There isn’t a lot of world building or descriptions, but there is a skeleton of a story there. I had these big plans to write a book 2, where the two characters, Serena and Kai are thrown into a contemporary world, where the fantasy world they had been in was part of an online, virtual reality game. I didn’t really know where it was going to go from there.

In 2015 I had this really great idea to write a Peter Pan story. I was so excited!

Peter Pan grew up. He gave up. Neverland is dying. Neverland’s fate rests with a girl who has loved Peter for her entire life and the son of a codfish.

I think that with some more work this story could actually be really good. I thought it was brilliant when I was writing it, but reading back through it after NaNoWriMo ended, I could tell it wasn’t. In the 30 days I had to write it, it just didn’t work. It was weak and shallow. It just fell through in a lot of places. With more work, I could actually envision people reading it. One of these days I’d like to go back and rework this story and make something better.

Onto 2016! Geez, I didn’t really realize just how long this post was going to be, but we’re nearly there!

2016 was the year of fantasy again, and actually this is the story that is the foundation of my current fantasy WIP.

Emma and Jonas, heirs of waring Courts in the land of Adina. In an attempt to end the war that has been raging so long that no one knows why they are still fighting, they agree to marry each other, knowing nothing about the other person. When they do meet, there is this unexplainable attraction, knowing, and fear of the strong feelings they feel for each other.

Though, all is not well in the world. There is one, who doesn’t want the fighting to end. She wants the power all to herself, so she steals it. The magic Emma had been born to protect falls into the wrong hand. In order to save her Court and the land they live in, she embarks on a journey to find her ancestors – because it all began with them.

I’ve already reworked the story, so this synopsis isn’t entirely accurate to the story anymore, but the gist, the idea of it is still the same. I’m so completely in love with this story. I love the characters and the world keeps opening up to me. I’m learning more and more about these characters. Usually I write in chronological order, but for this story, I’ve been writing out of order, and these scenes are everything.

This was the first year that I didn’t write a whole skeleton of a story. I got caught up in the world building and character development that I only got through a fraction of the story.

This was heavily influenced by Tangled, Barbie Island Princess and even Anastasia. This story was just one I wanted to write, but wasn’t the story I had initially set out to write for this past NaNoWriMo.

I intended to write a mermaid story, about a girl who had been living for hundreds of years, and this guy who she was in love with. For whatever reason the guy would die, but she would always find a reincarnation of him years later, and they would fall in love. But every time he died, she grew angry and vicious, causing havoc every where she went. The idea and concept of the story got to out of hand – I wanted too much to happen, and didn’t have the time to research and plan it all before NaNo started. Sadly I had to put it aside, and quickly come up with something else to write.

Emilia has lived her whole remembered life on an island. She doesn’t know how she got there, or who she really is. All she wants in the whole world is go find the people who she lost. Kiko, her best friend on the protects her fiercely, and is her only real companion on the island.

Then Jamie, the heir to the Kingdom of Corona comes to the island, and Emilia is intrigued. Never has she seen someone who looks like her. With hesitation she allows them to meet, and Jamie insists that she come back to civilization with her. Wanting to know who she is beyond the island, and if there are people who have been looking for her, Emilia agrees to go with him.

When she reaches Corona she isn’t prepared for what society has waiting for her.

The synopsis doesn’t say much, because I wasn’t even really sure where the story was going to go. This might be a story I go back to, but I’m not sure.

For 2018, I don’t know what I’m going to write yet. But in the meantime, I’m going to be working on Destiny and hopefully get that going onto the next step, querying. I’ll also be working on my Fantasy WIP. Maybe something will inspire me and I’ll have characters screaming at me to write them in November.

Feel free to friend me on the NaNoWriMo site! Come November we can cheer each other on!