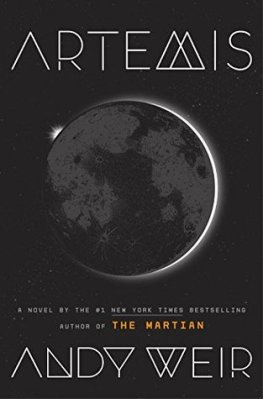 Not crazy, eccentric-billionaire rich, like many of the visitors to her hometown of Artemis, humanity’s first and only lunar colony. Just rich enough to move out of her coffin-sized apartment and eat something better than flavored algae. Rich enough to pay off a debt she’s owed for a long time.

So when a chance at a huge score finally comes her way, Jazz can’t say no. Sure, it requires her to graduate from small-time smuggler to full-on criminal mastermind. And it calls for a particular combination of cunning, technical skills, and large explosions—not to mention sheer brazen swagger. But Jazz has never run into a challenge her intellect can’t handle, and she figures she’s got the ‘swagger’ part down.

The trouble is, engineering the perfect crime is just the start of Jazz’s problems. Because her little heist is about to land her in the middle of a conspiracy for control of Artemis itself.

Trapped between competing forces, pursued by a killer and the law alike, even Jazz has to admit she’s in way over her head. She’ll have to hatch a truly spectacular scheme to have a chance at staying alive and saving her city.

Jazz is no hero, but she is a very good criminal.

That’ll have to do.

This review will contain spoilers, but they will be after my general reaction.

I loved The Martian.

I got really excited when I found out that Andy Weir had another sci-fi coming out.

I wish I had enjoyed Artemis more than I did. It wasn’t a bad book, but it felt super rushed, and I wasn’t a huge fan of Jazz.

In The Martain Mark Watney’s chatty peppy attitude made sense. He was alone on Mars trying to keep his sanity. Rather than falling into a pit of despair he found the humor and the light in his situation. Jazz just felt like a copy and pasted version of Watney, but in her case, it didn’t make sense. She was annoying. Her crass, smart-ass attitude grated on my nerves, and for most of the novel her language, inner dialogue and attitude is unfounded she just didn’t make sense. She’s smart, but she constantly chooses to make awful and stupid choices. There’s being stubborn, and then there is being stupid, and in my opinion she makes stupid choices for pretty much the whole novel.

I think Weir wanted her to be this badass, aloof woman, but it didn’t come across that way.

Ugh, I really wanted to love this book, because I loved The Martian. What is it with sci-fi books letting me down recently?

This book is a quick read – I read it in four hours. There isn’t a lot of world building, and the whole heist element felt a little half assed, half baked.

This book could have been waaaaay better.

I wish Jazz hadn’t been so unlikable.

I wish the plot hadn’t been so rushed through the whole book.

I wish the heist element had been more thought out, and not so clichéd.

I wish that there had been more information on the “side kick” characters.

Jazz was obnoxious and easily my least favorite aspect of the book. Her whole attitude made no sense to me. She was standoffish, crass, a smart ass, and what? It all stems from the fact that she doesn’t want to be pegged for her genius? She brings up the “potential talk” so many times. It’s clear she’s brilliant, and can pick up tasks, and new knowledge pretty quickly and easily. For someone who is so concerned with making money, getting rich, she chooses to not take up a job that would get her more money. But then there’s the “i’m too lazy to do anything to make my life better” BUT “I’m willing to take on a very very dangerous heist that could go incredibly wrong, and that requires all of my skills” just so that she can get rich quick.

It’s like cheating in school. “I spent six hours writing down everything onto a cheat sheet.” ….. So you studied?

And for someone so smart, she’s pretty blind, and has the mentality and humor of a 15 year old boy. For how many time’s her sex life is brought up, she doesn’t even kiss a guy until the end of the novel….so why bring it up at all?

Also, the whole reusable condom thing? WHY WAS THAT IN THE BOOK? Nothing comes of it, except for Svoboda to hint desperately that he has a thing for Jazz, and wants her to try it out on him. LIKE COME ON. It literally hold no weight in the scheme of things. Weir put it in there to show just how sexually active Jazz is, but we never see Jazz do anything. In fact, she constantly refutes the claims that she has a new dude in her bed every night.

Dale, Rudy and Svoboda were probably my fave characters. I wish Kelvin actually made an appearance.

This book was so rushed. The plot just whizzed by, with very little explanation or world building. This book could probably have been a little longer, and probably should have been told from multiple points of view. It would have been interesting to see it from Rudy’s point of view and Jazz’s. Artemis was pretty easy to visualize, but it also felt really unoriginal, and the world just left a lot to be desired.

The whole heist on the moon…really? Maybe I’m missing something but how exactly was what Jazz did, a heist? It was a sabotage mission at best. Heist is defined as a robbery. Is Weir defining it as a heist because she steals the power-for-oxygen contract? Because for a supposedly smart person, by the end of the book, she’s only like 15,000 slugs richer than she was at the start of the novel. Jazz risked everything for like no reward.

I found myself not buying into the whole heist plot. It was lame. It was full of gangsters, mobsters, “high stakes” and some new scientific technology that will change the face of the world as we know it…..really? And it can only be manufactured on the moon? REALLY? I just can’t. I didn’t buy it. I didn’t buy Jazz’s involvement, and her fast acting actions of going into hiding, and just knowing what to do in that situation? YEAH RIGHT.

Now, a book doesn’t need a romance to sell me on the story, but in this case, I think Svoboda should have been dating Jazz. It was only in the few interactions they had that I actually liked Jazz. I thought that they complemented each other well. But mostly, everyone in Jazz’s life just enabled her shit behavior and then condemned her for it. Maybe it’s because they don’t understand her, or maybe they just don’t want to, but they should’ve had an intervention or something to talk some sense into her. It would have been nice to get some more information on these characters since they end up playing such a big role in the end.

For a super secret heist, SO MANY PEOPLE END UP KNOWING ABOUT IT.

There were just a lot of issues with this book from lack of world building, to annoying characters, and an unbelievable heist.

I’m going to have to reread The Martian again to remind myself of a good sci-fi that makes sense, because damn, I’m 0-2 for sci-fi in 2018 and it sucks.