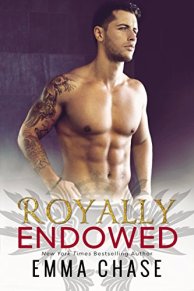 Logan St. James is a smoldering, sexy beast. Sure, he can be a little broody at times—but Ellie Hammond’s willing to overlook that. Because, have you seen him??

And Ellie’s perky enough for both of them.

For years, she’s had a crush on the intense, gorgeous royal security guard—but she doesn’t think he ever saw her, not really.

To Logan, Ellie was just part of the job—a relative of the royal family he’d sworn to protect. Now, at 22 years old and fresh out of college, she’s determined to put aside her X-rated dreams of pat-downs and pillow talk, and find a real life happily ever after.

The Queen of Wessco encourages Ellie to follow in her sister’s footsteps and settle down with a prince of her own. Or a duke, a marquis…a viscount would also do nicely.

But in the pursuit of a fairy tale ending, Ellie learns that the sweetest crushes can be the hardest to let go.
***
Logan St. James grew up on the wrong side of the tracks, in a family on the wrong side of the law. But these days, he covers his tattoos and scars with a respectable suit. He’s handsome, loyal, brave, skilled with his hands and…other body parts.

Any woman would be proud to call him hers.

But there’s only one woman he wants.

For years he’s watched over her, protected her, held her hair back when she was sick, taught her how to throw a punch, and spot a liar.

He dreams of her. Would lay down his life for her.

Everybody knows the bodyguard rules: Never lose focus, never let them out of your sight, and never, ever fall in love.

I enjoyed this final book in the Royally Series by Emma Chase, but it wasn’t my favorite. Royally Matched was the one I liked the most – I have a review here as well as for Royally Screwed here. While I did like the book, I thought it was kind of redundant in the first half.

The first half consists of nothing but recaps of the first two books, since both main characters in this one were featured heavily in one and two. The second half was the actual story, and it felt a little rushed and short. While I wasn’t a huge fan of the first half, there were moments that I did like, and found Logan to be really cute and charming.

I really liked Ellie and Logan together and how well they worked as a pair. There weren’t moments I wasn’t rooting for them, and from the very first book I knew Logan was sunk when he first met her. Ellie is strong willed and loves to live life to the fullest, whereas Logan has been trained to be more cautious and wary of his surroundings. They balanced each other out very well in my opinion. Neither of them are perfect and they make mistakes, but without fail, they always find their way back to each other.

One other thing that annoyed me a little about this book was how heavily it featured the couples from the previous books. I didn’t mind that they were in it, because it was nice reading about them, but it felt more like a book about all of them rather than just Ellie and Logan. The other books were more just about the couple. I guess overall, this book probably could have been a novella, or integrated into the other two books as a side romance.

Overall, I did enjoy the book, but my favorite is still Royally Matched, and if you’ve read the first two, then you should read this one. And there’s a novella Royally Raised – which takes place some years later following the children.