I absolutely loved this book – more than I thought I would. I hope you do too! 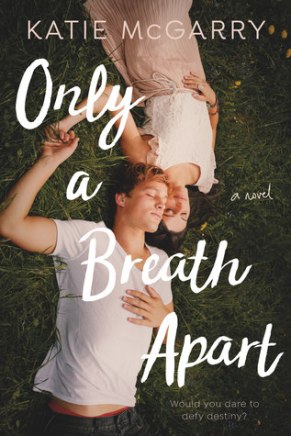 Title: Only a Breath Apart

So the town folklore says, but while Jesse’s had his fair share of tragedy, the only curse he believes is in his grandmother’s will: in order to inherit his family farm he must win the approval of his childhood best friend, the girl he froze out his freshman year, Scarlett Copeland.

Glory Gardner tells Scarlett she has hidden psychic abilities, but Scarlett thinks Glory is delusional. What is real is Scarlett’s father’s irrational fears, controlling attitude, and the dark secrets at home. Scarlett may have a way to escape, but there’s a hitch: she’ll have to rely on the one person she used to trust, the same boy who broke her heart, Jesse Lachlin.

Each midnight meeting pushes Jesse and Scarlett to confront their secrets and their feelings for each other. But as love blooms, the curse rears its ugly head…

I received an eARC in exchange for an honest review – spoiler free.

I’m still an internal chaotic, emotional mess from this book, and it’s been hours since I finished it. Only a Breath Apart made me feel rage, sadness, happiness, frustration, wonderful – it made me feel everything. The characters, the story, the emotional vulnerability, this book was so good.

I’ve read a Katie McGarry book in the past – Pushing the Limits – I don’t know why I never finished the series, or read any of her other books, because I did like it. So, this was my first of her books in years, and it didn’t disappoint. It was so well written and so engaging. I legit stayed up ALL NIGHT reading yet (yes, I regret that choice now) but I couldn’t put it down. I just kept turning the pages, completely caught up in this world and these characters.

The writing was beautiful, and the character arcs were believable and real. I felt like I was right in the middle of their lives, their world. It was so easy to picture everything, to feel everything.

Jesse, I just wanted to hug him throughout the whole book. His life hadn’t been easy, still wasn’t easy and after a huge loss he has to figure out who he is. He has to prove that he can take care of himself. He had to grow up so quickly, and even has a child he had to deal with things no child should have to deal with. His mother is constantly telling him that their family is cursed, that they can never find love or happiness because it will end in disaster. As he grew up, Jesse found solace with his grandma, with her farm, and with Scarlett.

Scarlett, on the outside she is perfect, an Ice Princess, frozen, unfeeling, but inside she’s burning, chaotic, scared. Her life isn’t as picture perfect as it may seems. Her life is like a tight rope, and one misstep means danger, fear. I was constantly tense whenever things became stressful for Scarlett. She was so alone, and on top of that, the one person she thought she could rely on had broken her so completely.

Glory – she played a much bigger part in this book than I thought she would, and I loved her. She’s the kind of character that -regardless of psychic abilities – knows what two people need, and she knew what both Scarlett and Jesse needed. She pushes them, urges them to figure out who they are in the world, to jump.

Mr. Copeland can rot in hell. I hated this man, but I can appreciate that Katie McGarry got his character so right. When an author can make you viscerally hate a character, make them so real, so ugly, so mean, you know they’ve done their job right. I’ve never personally dealt with what Scarlett and her family goes through, but it felt so real, so intense, and it was so easy to picture.

Pastor Hughes, he was a light in a pretty dark tunnel. He’s the adult that you want on your side when it comes down to it. He treated Jesse and Scarlett like humans, adults, he never talked down to them and always advocated for them. He believed them, listened to them and gave them the opportunities to stand up for themselves, but was also there when they couldn’t.

Marshall – at first, I didn’t like him. He was the adult that thought he knew better than Jesse, wanted to control him. By the end of the book, he’s acknowledged the fact that he handled the situation poorly. Jesse has realized the same, and when it counts, Marshall is there, backing Jess, helping Scarlett. He steps up and is in their corner, he fights for them rather than looking down on them.

This book was pain, it was beauty and it was magic. It’s about learning who you are, and what you can survive. It’s realizing that, that journey to self-discovery can be an adventure with good and bad moments. Moments when you triumph and moments when you fail. It’s about when you fail, you have to get back up and try again.

It’s about finding adventure – “second star to the right and straight on till morning”.

I loved this book so much, and I hope you do too. It’s now one of my top four favorite contemporary novels (all are tied for first place) and all have given me the same kind of feeling.

You definitely want to check this book out, it comes out January 22, 2019!

3 thoughts on “Book Review: Only a Breath Apart”