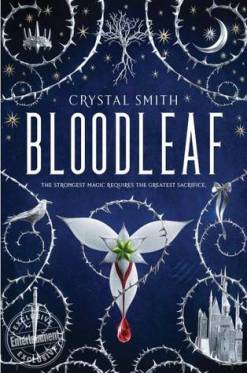 Princess Aurelia is a prisoner to her crown and the heir that nobody wants. Surrounded by spirits and banned from using her blood-magic, Aurelia flees her country after a devastating assassination attempt. To escape her fate, Aurelia disguises herself as a commoner in a new land and discovers a happiness her crown has never allowed. As she forges new bonds and perfects her magic, she begins to fall for a man who is forbidden to rule beside her. But the ghosts that haunt Aurelia refuse to abandon her, and she finds herself succumbing to their call as they expose a nefarious plot that only she can defeat. Will she be forced to choose between the weight of the crown and the freedom of her new life?

I received an ARC through a trade – this will be a spoiler free review!

I’m just going to start by saying yelling, THIS. BOOK.

I loved it. Flew straight through it actually. I probably could have finished it in one sitting, but I made the unfortunate smart choice of going to bed at a reasonable (for me) hour instead of staying up until the early morning hours to finish it. I kind of wish I had just stayed up and finished it though.

Bloodleaf definitely held up to the hype I heard surrounding it. It felt original, new and fresh, and I honestly can’t pick out a book on my shelf that it reminds me of. BUT I will say this, and I think this is only because I’ve been inhaling so many fantasy books lately, I did pick up on some similarities. I’m not holding them against the book at all, because they’re things I absolutely enjoy in a story.

The world building and the magic in this book are very easy to visualize and understand. It wasn’t super heavy on either, but more than enough to picture the world, the kingdoms, it’s inhabitants, the rules. The magic system as well, complex enough that it has some structure and rules, but easy enough that it doesn’t take forever to figure out how it works – does that make sense?

Wow, my brain just turned off, and I kind of just lost my train of thought.

I’m going to start this next part briefly talking about something that bothered me a bit in this book, but by no means ruined it or is a point that angered me.

I do think it was a little rushed, and specifically the relationship that blooms between Aurelia and Zan. Now, I know, in the book that weeks pass from the start to the end, but the relationship felt a little insta-love-y. Just a little bit. I feel like if we had been able to see more of the time passing, through little scenes or snippets or something, it wouldn’t have felt so rushed. It is very much a plot driven book, which isn’t a bad thing, and I clearly loved it.

But, with that being said, I absolutely loved Aurelia and Zan together. I thought they had good chemistry and balanced each other out pretty nicely.

I really liked all the characters in this book, except the antagonist (ugh. More on him later).

On the run, Aurelia quickly finds herself among very nice people, if not a little annoying (looking at you Zan) and she cares deeply for them. Nathaniel and Kate are friends of Zan who almost instantly adopt Aurelia into their group.

I love Nathaniel and Kate. They were adorable, but WHY did THAT have to happen? (read the book when it comes out to find out what I’m talking about.) They were such good people, so caring and kind.

As for Zan, there wasn’t a point where I didn’t not like him. Even when he was annoying Aurelia, I liked him. I didn’t see his twist coming, though in retrospect it was kind of obvious, but I loved being surprised.

Then there’s Aurelia’s friend Kellan – and there is a scene in the beginning of the book, that actually brought tears to my eyes. He’s her protector, there for her whenever she needs him to be, but he doesn’t fully know her, or understand her.

Which brings me to Aurelia. I felt for her through this whole book. When she got emotional, I found myself getting emotional, especially when she would look back on what she had lost. She had so many hard choices she had to make, and she comes out the other side a better person – well, a changed person. She grew stronger as the story progressed.

And finally, Toris. Ugh. Ugh. And Ugh. He was a good villain, but he annoyed me. I didn’t see his twist coming though.

There were actually quite a few twists in this book, that caught me by surprise. I loved it. 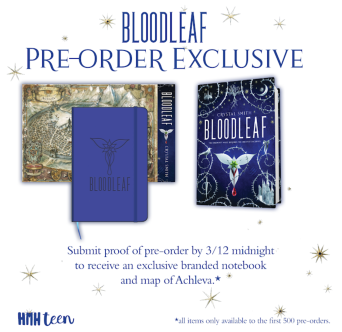 Agh, I cannot wait for book 2! I’m really interested in seeing how things will play out and what will come next. I do feel like Bloodleaf wraps up quite nicely, so I’m curious to see what happens next. I’m so excited for this book to be out in the world, for everyone to read it and fall in love with these characters! Make sure you pre-order if you haven’t already! There’s an awesome Pre-Order Incentive!