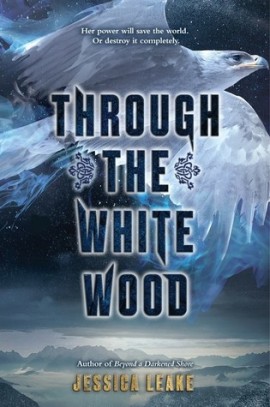 Title: Through the White Wood

Katya’s power to freeze anything she touches has made her an outcast in her isolated village. And when she loses control of her ability, accidentally killing several villagers, she is banished to the palace of the terrifying Prince Sasha in Kiev.

At the castle, though, she is surprised to find that Sasha is just like her—with his own strange talent, the ability to summon fire. Instead of punishment, Sasha offers Katya friendship, and the chance to embrace her power rather than fear it.

But outside the walls of Kiev, Sasha’s enemies have organized their own army of people who can control the very earth. Bent on taking over the entire world, they won’t stop until they’ve destroyed everything.

Katya and Sasha are desperate to stop the encroaching army, and together their powers are a fearsome weapon. But as their enemies draw nearer, leaving destruction in their wake, will fire and frost be enough to save the world? Or will they lose everything they hold dear?

This will be a Spoiler Free review! I was able to trade for an ARC on Twitter!

I didn’t read Beyond a Darkened Shore but now I want to. I’m glad that this one is more of a companion novel, than a direct sequel. I liked the world and the characters. I really enjoyed this book, but the ending fell flat.

Let’s start with the good first, before I get into the issues I had with this book.

Overall, it was a fun, engaging and quick fantasy read. I was able to knock it out in a handful of hours. It kept my interest and there were a few moments of heart racing anticipation and heartfelt moments.

The book starts off in the middle of a conflict, full of fear and dread and it blooms into this kind of epic journey of self-discovery on Katya’s and Sasha’s part – though it’s predominantly Katya’s story.

The writing was pretty, but not overly flowery. It was descriptive enough to create a clear picture of the world and the different places they travel to. I liked all of the characters, well, all the ones you’re supposed to like, and rooted for the good ones to triumph over the bad ones.

As for the characters, I liked Katya. I liked how her fear was handled and her apprehensions. I thought the author did a good job at handling her trauma and self-doubt. To me, it made for a believable character arc for Katya.

Prince ‘Sasha’ was almost too perfect? Like I kind of wish he’d been a little darker. But he’s definitely different than all the rumors paint him to be. He’s intrigued and enamored by Katya and he does take care of her feelings – even when she misinterprets his towards her.

As for the other characters, I wish more time was spent with them. We get glimpses into their lives, their wants, desires, but they’re only glimpses.

I loved the dynamic with their powers, I thought it was pretty cool. I also had my suspicions about Elation.

I strongly believe that this book could have easily been at least two, and I kind of wish it had been. Obviously, this author is trying to tell multiple stories set in the same world, and those stories overlap. I love this and hope one day I can do this with my stories. And who knows, maybe at the end, all the stories set in this world will overlap into one giant conclusion.

While I really did enjoy this book, I did have an issue…

The pacing. It was rushed and also too slow. Now, you’re probably wondering how that makes any sense, and I’m still trying to sort it out. Maybe I missed it, but not a lot of time seemed to pass between the start and the end of the book – maybe a handful of weeks or a month or two. It didn’t feel like a long time at all, which I find a little unrealistic in the scheme of things.

Unfortunately for me, the pacing was just off with this book. I think if it were to be slowed down, or spread out across two, or even hell, make it a 500-page book, it would have rated higher.

Overall, I liked this book, and as an introduction to Jessica Leake, I’m totally happy to read anything she publishes. I’m hoping to get to Beyond a Darkened Shore soon, now that I’ve read this.

One thought on “Book Review: Through the White Wood”