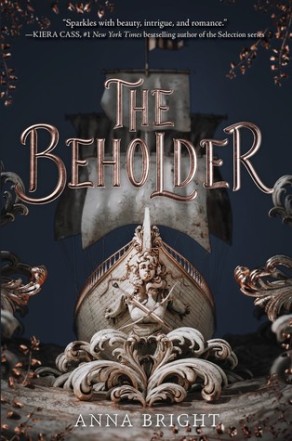 Selah has waited her whole life for a happily ever after. As the only daughter of the leader of Potomac, she knows her duty is to find the perfect match, a partner who will help secure the future of her people. Now that day has finally come.

But after an excruciatingly public rejection from her closest childhood friend, Selah’s stepmother suggests an unthinkable solution: Selah must set sail across the Atlantic, where a series of potential suitors awaits—and if she doesn’t come home engaged, she shouldn’t come home at all.

From English castle gardens to the fjords of Norge, and under the eye of the dreaded Imperiya Yotne, Selah’s quest will be the journey of a lifetime. But her stepmother’s schemes aren’t the only secrets hiding belowdecks…and the stakes of her voyage may be higher than any happy ending.

This will be a spoiler free review!

Firstly – I freaking love the cover of this book. It’s one of my favorites. It’s just so pretty, and when it was revealed, I couldn’t stop staring at it. I would have bought this book for the cover alone. Just so I could have it on my self.

I loved this book, though it did take me until about 200 pages to get to that point. Regardless, even from the beginning I knew I was going to enjoy it immensely. It’s definitely a new favorite book.

I didn’t realize going into The Beholder that it was a fantastical alternate history story – I thought it was straight fantasy. I thought it was really cool how Anna wove this story, but I do kind of wish there was a map to go with it, or some kind of index. I’m okay-ish at world geography on a large scale, but it would have been nice to have a map to show where these places were. I can assume and infer from what I know, but a map would have been cool. I think maybe this is a ‘me issue’ – I kept second guessing my geographical knowledge, constantly trying to make sure I was inferring correctly, and placing places correctly.

But back to how Anna made this story so interesting. Between the alternate historical timeline and the seemingly seamlessly woven together fairytales and stories that she sprinkled throughout the book, she’s created a very unique and captivating world that keeps you engaged. Her writing is also very pretty but not overly flowery, and everything was easily imagined (besides my aforementioned world geography skills). Each time Selah arrived in a new place; it was easy for me to see it.

I knew going into this book that the romances would hook me – Anna told me as much, and they definitely did…one significantly more than the others. With that being said, let’s talk characters:

At the beginning, I didn’t feel strongly one way or the other towards her. She’s a little naïve and has a very limited, romanticized world view. She’s mapped out her whole future, assuming it will all go according to her plan.

Quick aside – I’m sure everyone has done this at some point, but you know when you’re lying in bed at night and you create a whole relationship, a whole future with a fictional someone- whether it be a celeb, or the perfect person…or when you wake up from those so real, so vivid dreams only for the real world to crash down around you…

Selah is just like every other person. And like most romanticized fictional relationships and things, it doesn’t end with that Happily Ever After. It’s more like a bucket of cold water has been thrown upon you.

Throughout the book, she never really loses her naivety, and because of that, she always tries to see the good in others. It’s not necessarily a bad view to have, but it doesn’t leave for much of a guard against ill intentions.

She does do some serious growing when she meets Torden – aka my new book boyfriend – but more on him in a bit.

In the beginning, she’s a bit of a puppet, mostly unwittingly, but by the end of the book, she seems like she is finally taking control of her own life. Goodbye rose colored glasses.

I think the crew; the captain and Perrault are going to play a much bigger part in book 2. It’s kind of hard to talk about them, without talking about some spoiler-y things, so I’m going to keep it pretty vague. It’s hard to explain why I think this, also due to spoiler-y thing, but the bigger picture becomes clearer to Selah and she’ll need them to help her.

I liked Lang and thought that maybe he’d be a love interest, but he’s super secretive (for good reason) and I think that they’d just be better off friends.

Perrault, despite his annoyances, is basically as much of a puppet as Selah is, but he enjoys his ‘power’ and likes feeling superior.

And the Crew – they’re fun and unique and are super supportive of Selah.

I don’t even want to comment because this whole thing that went down in England infuriated me on Selah’s behalf.

Also, it’s a huge spoiler if I were to talk about him. I’m 100% behind Selah on what went down. As for Bear – cute, disarmingly charming, likes Selah. I loved him until I didn’t.

Can I marry him? Please?

I knew I’d fall for the romance, and oh how I did.

Think, Thor, but red hair. He even prefers to use a hammer.

I’ll legit fight Selah for him. She views him as her opposite, but fundamentally they are pretty similar if not the same. He challenges and pushes her out of her shell. He’s gentle with her, and almost reverent, and he’s exactly what she needs.

I could go on and on, but again, we reach spoiler territory.

As for his family:

I love them all.

But I do think Anya acted selfishly – though that could just be my bitterness talking on Selah’s behalf.

Clearly torn between his love for his wife, and his love for Selah. His failing health further complicates things.

I can’t wait to see more of her!

Now that we’ve talked about the characters, let’s talk really quick about some of the things that I wish had been done better? Differently? More to my taste? These are personal preferences. As the story stands, it’s a good book, with very good writing, an interesting plot that will further unfold, and one that I will recommend to everyone to read.

Other than wishing for a map or index, I wish more time had been spent with each suitor. I know it was supposed to be a fast ploy to get Selah married and away from Potomac, but two weeks? That’s insta-love territory and I’m not a huge fan of that. Though, I love Selah and Torden and how quickly they hit it off…I’m a walking contradiction.

And the other thing, I didn’t find much plot to this book. Other than Selah’s character growth and some adorable romantic scenes, not much happens. I definitely think it’s going to be explored and explained further in book 2. We [the reader] don’t really know why – beyond rhymes – Selah is so terrified of entering the Imperiya, since in Potomac, they seem relatively untouched by it. Yet Selah has this intense fear.

I’m hoping there is more conflict, than just being forced to find a husband in book 2.

Though, I guess The Beholder’s conflict is the internal struggle Selah has to face – the worry for her home, her father, finding a husband and returning home.

Overall, I finished this book with a dire need for book 2 – and this isn’t even out yet, so I’m screwed. I’m really excited and interested to see what kind of journey Anna takes Selah [and us] on in the next book. I’m so grateful I got a chance to read The Beholder early – I’m still kind of shocked that I did, and I’m happy that I get to share it with you all.

But seriously, can I marry Torden? I can’t wait for you to meet him.

6 thoughts on “Book Review: The Beholder”