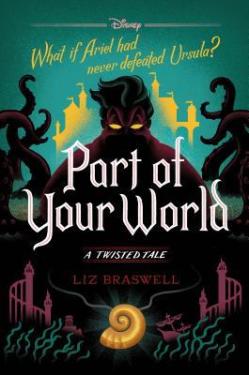 What if Ariel had never defeated Ursula? Five years after the (twisted) events of the film, Ariel is now the queen of Atlantica, and Ursula is running Eric’s kingdom on land. But when the sea witch threatens Atlantica once more, Ariel finds herself returning to a world (and a prince) she thought she’d left behind forever.

This will be a short/mini review.

I’m going to start with, this book was long. 65 chapters long. Almost too long. I listened to it on Audible and had to speed it up because even listening to it for hours a day, it was taking forever to get through. I enjoyed the story, but there were parts that lagged. I think it would make a better movie than a book, and I’m totally on board of a move adaptation…but I’m always on board for more Little Mermaid.

With that being said, I thought this was a unique take on what happens if the bad guy wins. This was the first book I’ve read in the Twisted Tales series, and I knew I would have to buy it when I saw that it was about Ariel and Eric. I loved the twist, but I think the length of the book is what really annoys me.

I did like that literally the whole cast is present in this book, from Scuttle, to Flounder and everyone in between. That wasn’t something I was expecting when I started it. I expected Ariel, Eric and Ursula. And knowing the Disney version, I definitely viewed it in my head in a animated version, but it also made it very easy to picture everything – the Castles, the places, the town, the characters – all very vivid.

Overall, I enjoyed the story for what it was, but it could have been a little shorter. If you’re a fan of the Little Mermaid and like twisted takes on the story, then this won’t disappoint. I’m interested in checking out the other books in the series now.

3 thoughts on “Book Review: Part of Your World (Twisted Tales #5)”