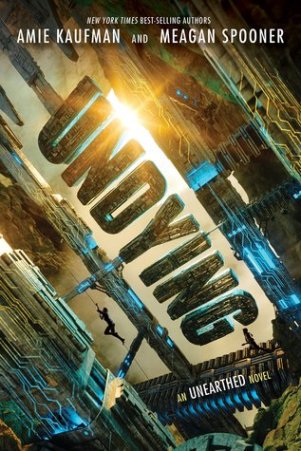 Trapped aboard the Undying’s ancient spaceship and reeling from what they’ve learned there, scavenger Mia and academic Jules are plunged into a desperate race to warn their home planet of the danger humanity’s greed has unleashed. From the mountains of Spain to the streets of Prague, the sequel to Unearthed is a white-knuckle ride that will send readers hurtling back to earth and leave them breathless until the last page.

This will be a spoiler free review…mainly because it’s been so long since I read it and I don’t remember specifics. It’ll also be a relatively short review for the same reason.

Firstly, there was a recap for Unearthed at the beginning of this book and I loved that. Having been a year since I read the first book, it was nice to have a little refresher before diving in. I also now want all major fantasy/series books to provide a short little recap. I don’t know why it’s isn’t more common place, with at least a year being between most releases and I read so much in that time frame – as do other readers. I can’t keep every story straight. Even ones I truly love – their plots start to blur after a while.

I absolutely loved this book and thought it was a great conclusion to the duology. You know how sometimes, the ending falls flat, that doesn’t happen in this book. Actually, there was a moment towards the end that had me screaming and running to Twitter to tweet at Amie and Meagan.

Tears! Tears fell from my eyes reading this book and I definitely did not anticipate crying reading the book. Turns out I just needed to wait another few pages and I wouldn’t have gone screaming to Twitter about a certain scene with a certain character.

Anyways, this was such a good ending to this story, to Mia and Jules’s story. I enjoyed their relationship a lot and how it progressed. I also didn’t see some of the twists coming, and more than once, I was holding my breath trying to figure out exactly how this was all going to go down, and if people were going to make it to the end of the book.

And the end of the book, how it wraps up for Mia, I absolutely loved it.

There was only one little thing that I wished had been different. I was a little disappointed that the “space” element kind of gets lost in this book, but I find that, that happens a lot in YA sci-fi. Clearly it doesn’t affect my love for this book, this duology, and it’s my spaceship/space opera/set in space loving, sci-fi loving heart that wishes it had taken place somewhere other than Earth. But that’s why I’m writing that story – the one I want to read, the kind I love. I’m not faulting Undying for not being exactly the book I desperately want, but if you go into it thinking that it’s going to be Indiana Jones meets Lara Croft in space, like Unearthed was, you’ll maybe be a bit disappointed. I also understand that this was where the story was always leading, back to Earth, with Mia trying to get back to her sister. So, it makes sense plot wise.