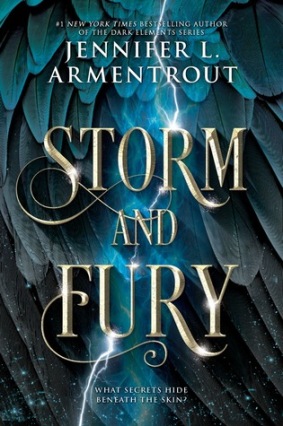 Title: Storm and Fury (The Harbinger #1)

Eighteen-year-old Trinity Marrow may be going blind, but she can see and communicate with ghosts and spirits. Her unique gift is part of a secret so dangerous that she’s been in hiding for years in an isolated compound fiercely guarded by Wardens—gargoyle shape-shifters who protect humankind from demons. If the demons discover the truth about Trinity, they’ll devour her, flesh and bone, to enhance their own powers.

When Wardens from another clan arrive with disturbing reports that something out there is killing both demons and Wardens, Trinity’s safe world implodes. Not the least because one of the outsiders is the most annoying and fascinating person she’s ever met. Zayne has secrets of his own that will upend her world yet again—but working together becomes imperative once demons breach the compound and Trinity’s secret comes to light. To save her family and maybe the world, she’ll have to put her trust in Zayne. But all bets are off as a supernatural war is unleashed…

This will be a spoiler free review. I was lucky enough to be able to trade on Twitter to get an advance copy of Jen’s next book.

I finished this a few days ago and have been struggling to write my review for it because I want to scream certain things, but those things are spoilers. But I’m going to do it anyways.

I’M SO EXCITED FOR A NEW TRILOGY ABOUT ⬛️⬛️⬛️⬛️!

Okay, I’m done. I redacted the spoilers, so no hurt feelings. I just needed to get that off my chest. I say it’s a spoiler because it’s a big reveal for one of the characters, so I won’t give it away. I’m not sure if I truly saw the reveal coming, but it’s a good one and it makes sense to the story and the world Jen has created.

Speaking of the world, it was fun being back in this one. Now, it’s been quite a while since I’d read the White Hot Kiss Trilogy and it took some really deep mental digging to try and remember what had happened…I’m still not entirely sure, but there is definitely a re-read in my near/immediate future. Reading Storm and Fury has just made me really want to re-read the books. I’ve said it so many times on this blog, but I’m a huge JLA fan and will read just about anything she writes. I was in this reading slump, and I knew if I could just sit myself down and start this book, I’d be hooked easily – and I was!

In the acknowledgments, Jen says she had to rework/rewrite the world, and while I can kind of see that, I also think that the direction that is taken in this book feels natural. Like, you have this so you will have this. Sorry I can’t really be any clearer – spoilers! But basically, it’s like two sides of a coin, or two halves of an apple. It makes sense.

This book starts strong and keeps going until the last page. I was left dying for the next book – one, due to the cliffhanger, and two, due to the sweet moment it ended on. I cannot wait to get back to this world, with these characters.

But let’s talk about them for a minute –

Trinity – she’s badass. Better than most of the Wardens around her, she can kick some serious ass. She doesn’t let others define who she is, and she doesn’t hold back when they try and take her on. She also doesn’t let her failing eyesight stop her from doing anything, and while she doesn’t broadcast it, she doesn’t keep it from those who might ask. She’s also a hot head, full of snark, but has vulnerable moments. I really enjoyed her character, how she could carry her own and kick ass, but also not shy away from the fact that there are things she needs help with. True to JLA form, I have another new favorite female heroine!

Zayne, we meet again. * swoons * I remember liking Zayne in the White Hot Kiss trilogy (when I re-read them, I’ll have a better opinion, but until then) and actually had to do a little digging to try and remember how that trilogy ended. He’s like all of JLA’s hot guys (not complaining, I’m a big fan). He’s gorgeous, got a bit of humor and snark. He’s got the body of a god, and he’s willing to do anything for the girl he likes – even when she can kick his ass from here to next Sunday. He’s definitely not without his own secrets and baggage.

The two of them together…I loved them, a lot and I cannot wait to see how their story unfolds in the next books. Drawn together, they have to learn their boundaries and as they grown closer, and feelings grow stronger and hotter, they both have to face truths. Truths that hurt and can put them in danger, but they’d do anything to protect one another. I kind of liked the aspect that she was stronger than him – so often in books is the other way around. I’m not saying one is weak and the other is strong, they can both be strong and badass in their own ways, but Trinity definitely can whoop some ass…Zayne’s ass, and it’s kind of refreshing. Especially since he’s a huge, badass Warden.

As for some of the side characters, you’ll get to meet them soon, but I really cannot wait to read more about Peanut. That’s another thing Jen does well, the quirky sidekick/best friend who isn’t always a living…breathing…human. I say that, because…well, you’ll find out. Peanut’s great though and he’s also a new favorite.

If you’re ready to dive back into a new JLA book full of demons, Wardens and ⬛️⬛️⬛️⬛️with some kick ass action scenes, some fluff as well as steamy, full of banter and snark, look no further. Storm and Fury is the first book in a new set of books, keep an eye out on JUNE 11 2019 for it in stores! You don’t want to miss out on Trinity and Zayne’s story.

6 thoughts on “Book Review: Storm and Fury (The Harbinger #1)”