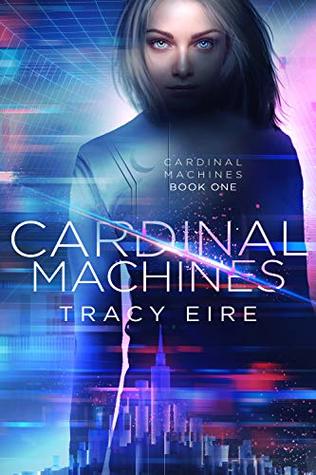 Katherine Zoey Cardinal would rather be known as Zoey Collins. It makes her invisible in school, at home, and lifts the eponymous mantle of her Great Aunt – a Mother of A.I., and 1st to put androids on the moon – from her shoulders. The Collins family is rife with penetration-testers and Private Eyes, a gene Zoey has inherited in spades. Emancipated from the Cardinals, Zoey is trying to make it on her own when her Great Aunt dies, leaving her a prototype Cardinal Machine.

Both beautiful and buttoned-down, he ends up installed in Zoey’s front room, and things are looking up – her model was designed for federal investigations and general law-enforcement. Very helpful when Zoey finds a man she’s tracking, dead, in a seaside park. The Sheriff’s Department rules it an accident, but her android’s assessment calls it murder….

The author of this book reached out to me and gifted me a copy of Cardinal Machines in exchange for an honest review and feedback. This will be a spoiler free review.

This book pleasantly surprised me. I wasn’t sure what I was going to find upon opening the file – there aren’t any reviews for this book on Goodreads, besides some 5-star ratings. I only had the synopsis to go by – which sounded promising – but there was no feedback from others on what to expect.

Overall, I enjoyed the book – the plot, the characters, the action. I thought that the characters were likable, Zoey has a bit of a temper and short fuse, but she’s been through a lot in her, so far short life. It’s not been easy on her, and she struggles with loss and feeling lonely. Her friends are good people, but sometimes they project their wants and needs onto her, and just kind of expect her to agree. I didn’t find this annoying, and actually found it pretty accurate to how teenage girls can act. As for Ocean – the android – I liked that we (the reader) got to see how he grew and changed a bit. Granted, he’s supposed to replicate humanity, but it was almost like he was human…at least more so than other androids. I have my suspicions about who he might be – there’s a theory presented in the book (I won’t give it away due to spoilers) but it would make sense if it went that route. His history is kind of this big mystery that is alluded to in the book, but Zoey isn’t privy to.

I liked Ocean’s and Zoey’s dynamic – she’s a lost and lonely teen who’d rather be out solving crimes and bringing in bad guys, and he’s actually programmed to do those things, but he spends a huge amount of time taking care of her and making sure she eats healthy foods. He kind of mother hens her, and I loved it. Like this is an android built for tactical and dangerous situations, and he’s put into a house with a teenage girl and spends time making sure she gets enough sleep at night and makes sure she has a comfortable place to live. It’s not shocking that Zoey forms a bond with Ocean very quickly, and why she freaks out when she thinks that at any moment, she could lose him. The more I think about it, the more I realize and love that he fusses over her. Yeah, it might be his programming, but I think that falls under “keep her safe and out of danger” not “make sure she eats three healthy square meals a day”.

As for the plot – it’s basically an action filled murder mystery, set in a futuristic California. Zoey’s Great Aunt created AI’s and upon her death, left Ocean to her. Zoey is a Private Eye – and I won’t lie, it was kind of hard to buy this, as she’s only a teenager. I understand that she followed her Uncle everywhere, and after a tragedy, she took up the family mantle, but it was a still a little hard to accept. It almost felt like she should’ve been older than 18, seeing as she’s still in high school.

They work together to solve a crime, which kind of morphs into another crime, but then swings back around full circle. The book ends having completed that mystery, but there’s a much larger game at stake and Zoey and Ocean are undoubtedly going to be in the middle of it.

I’ll briefly touch on the writing, before I jump into the few things that confused me (other than Zoey’s age) in this book. The writing solid. Like I said before, I honestly wasn’t sure what I was going to find when I started reading. With no reviews to give me an idea, I went in blind and with an open mind. I wanted and needed to give this book a fair shot, and I’m glad I did. I thought the writing was really good, though there were a few instances where I had to reread a section to understand what was happening…that could have been on me though, reading too fast. It’s a little science heavy in parts – some of that kind of went over my head, but it doesn’t necessarily detract. I would say that it means the author did some research before writing those scenes. It was also very easy to picture locations and places while reading. A pretty clear picture was painted, and I appreciated that.

So, besides some of the passages going over my head, and having to reread sections, I think my biggest confusion was the world itself. Obviously, it was set in the future, but I was never certain how far in the future. People dressed like we do today, even wearing Uggs. I mean, who’s to say they won’t still be wearing them in the future, but it kind of threw me out of the world. I had pretty clear pictures of the different places Zoey and Ocean visited and went to, but the world itself was confusing. It almost felt like I was just dropped into the middle of Zoey’s story with very little background info. As the reader, we only see the world through her eyes – and it’s not favorable towards androids, but why she’s parted ways with the Cardinal side of her family isn’t super clear – at least to me it wasn’t. And as I said before, you don’t get much of Ocean’s past either. Maybe this is clarified in the second book, but I struggled with the world a bit.

Despite the few confusions I had, I don’t think they super negatively impact the book, or the story as a whole. I also can’t think of another book that I’ve read that’s like Cardinal Machines. It’s unique and definitely stands on its own. I think the author did a really good job on this book and I’d definitely be interested in checking out the second book – Cardinal Spark when I catch up on some of the other books I need to read. I think it would also make a pretty good TV show, with it’s interesting character and crime plot. Though in that regard, I can kind of think of some comparable shows. It was good mix of sci-fi with this kind of dystopia feel.

If you’re looking for a good read with attractive androids, a hotheaded girl, a bit of murder and chaos, then you should probably check this book out.