If you’re reading this when it goes live, I’m hopefully about half way to Topsail Island, North Carolina for a week of beach, family and BOOKS! If you’re reading this later, there is a very good chance I’ve parked myself in a beach chair, at the edge of the surf and already engrossed in a book.

Last year I did a post showing the books I decided to take with me and it’s no different this year…but you knew that already based on the title of this post. Technically I should be in bed right now, seeing as we’re leaving at like 4:30AM yikes, but these blog posts don’t write themselves and my plan for getting ahead of them and having them scheduled to post did not happen.

Anyways, I’m really excited for my selection of books and somehow since I took this photo, I’ve added two more? Granted one’s an eARC and literally always on my phone, so I’m not really counting it, and there was book in my purse, and I’m just not going to take it out. Eight books might be overreaching and over estimating my abilities on how many books I can read in a single week and still be present for family interaction, but we will see. I’m not going to list the two extra books, that way there’s a little mystery when I do my monthly/beach reads wrap up!

Normally I like to read fluffy YA Contemporaries, or New Adult books while I’m at the beach, but this year I have kind of a mix.

I’m so excited to read this! I loved The Raging Ones when I read an ARC of it last year, so when

I was able to snag a copy of book 2, I knew I would be reading it while at the beach. I can’t wait

to find out how this duology comes to a close, Krista & Becca promised that readers won’t see what’s coming.

Sacrifice all you have to survive.

Imprisoned for weeks on an enemy starcraft, Franny, Court, and Mykal have sat with an unfathomable revelation. But as they fight to stay alive, escaping prison means trusting a young mysterious stranger. He knows everything about their lost histories, and when answers aren’t given freely, the bonded trio are forced to join a mission. One that will determine the fate of humanity.

Legend says, a baby—the first of her species—has the power to cloak and teleport planets. Tasked with retrieving the infant, Court fears the baby is just a myth, and if they fail, they’ll never find the truth about their origins.

As Court and Mykal grow closer, their linked bond becomes harder to hide, and dynamics change when Franny begins to fall for someone new. Vulnerable and with no choice, the hunt for the baby sends the trio on a dangerous path to Saltare-1: a water world where their enemies can’t die and survival comes at a high cost.

Echoes Between Us – Katy McGarry

I kind of freaked out when I saw that they were handing bound manuscripts out during her signing at ALA and managed to snag one! I loved Only A Breath Apart so I’m hoping that this is another new favorite! I mean, just read the synopsis, and I’m pretty sure this is going to be the first book I dive into!

Veronica sees ghosts. More specifically, her mother’s ghost. The afterimages of blinding migraines caused by the brain tumor that keeps her on the fringes and consumes her whole life haunt her, even as she wonders if it’s something more…

Golden boy Sawyer is handsome and popular, a state champion swimmer, but his adrenaline addiction draws him to Veronica.

A girl with nothing to live for and a boy with everything to lose–can they conquer their demons together?

Call It What You Want – Brigid Kemmerer

This is a re-read since I read it back in January of this year and I need a bit of a refresher. It’s also a book I’ve been requested to bring by a few family members. I’ve turned a couple of them into Brigid fans. I’m also taking my copy of A Heart So Fierce and Broken for those same family members and they’re anxiously waiting for it!

When his dad is caught embezzling funds from half the town, Rob goes from popular lacrosse player to social pariah. Even worse, his father’s failed suicide attempt leaves Rob and his mother responsible for his care.

Everyone thinks of Maegan as a typical overachiever, but she has a secret of her own after the pressure got to her last year. And when her sister comes home from college pregnant, keeping it from her parents might be more than she can handle.

When Rob and Maegan are paired together for a calculus project, they’re both reluctant to let anyone through the walls they’ve built. But when Maegan learns of Rob’s plan to fix the damage caused by his father, it could ruin more than their fragile new friendship…

This captivating, heartfelt novel asks the question: Is it okay to do something wrong for the right reasons? 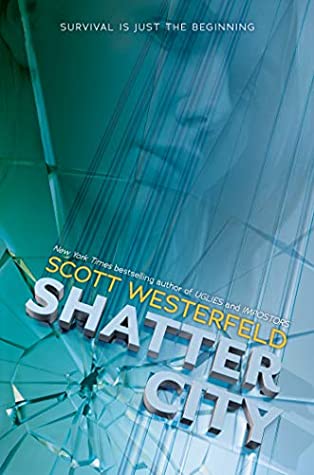 I read Imposters last year while at the beach, so it seemed only fitting that I read the second book to this new trilogy? Series? In the world of the Uglies. This is also going to be read by other family members, and if it goes missing from my bag, I’ll know why.

When the world sees Frey, they think they see her twin sister Rafi. Frey was raised to be Rafi’s double, and now she’s taken on the role . . . without anyone else knowing.

Her goal? To destroy the forces that created her.

But with the world watching and a rebellion rising, Frey is forced into a detour. Suddenly she is stranded on her own in Paz, a city where many of the citizens attempt to regulate their emotions through an interface on their arms. Paz is an easy place to get lost . . . and also an easy place to lose yourself.

As the city comes under a catastrophic attack, Frey must leave the shadows and enter the chaos of warfare – because there is no other way for her to find her missing sister and have her revenge against her murderous father.

I’m so excited to dive into this and I’ve heard nothing but good things. I think this is going to be an excellent book to read while sitting on the beach. I think I’m going to be able to get easily lost and just enjoy myself.

When America won the Revolutionary War, its people offered General George Washington a crown. Two and a half centuries later, the House of Washington still sits on the throne. Like most royal families, the Washingtons have an heir and a spare. A future monarch and a backup battery. Each child knows exactly what is expected of them. But these aren’t just any royals. They’re American. And their country was born of rebellion.

As Princess Beatrice gets closer to becoming America’s first queen regnant, the duty she has embraced her entire life suddenly feels stifling. Nobody cares about the spare except when she’s breaking the rules, so Princess Samantha doesn’t care much about anything, either . . . except the one boy who is distinctly off-limits to her. And then there’s Samantha’s twin, Prince Jefferson. If he’d been born a generation earlier, he would have stood first in line for the throne, but the new laws of succession make him third. Most of America adores their devastatingly handsome prince . . . but two very different girls are vying to capture his heart.

The duty. The intrigue. The Crown. New York Times bestselling author Katharine McGee imagines an alternate version of the modern world, one where the glittering age of monarchies has not yet faded–and where love is still powerful enough to change the course of history.

I’m a sucker for Greek mythology and I bought this a few months ago with the sole intention of reading it while at the beach, and I’m so excited that the time has come! I can’t wait to dive into this and see what this book has in store for me!

Sixteen-year-old cupid-in-training Kali is in an Olympus-sized mountain of trouble. Rule number one in arrow-toting matchmaking: don’t stick yourself. But accidents happen, and Kali instantly falls hard for her indie rock, bass-playing target, Benicio.

The God of Love is going to kill her. Even if he is her dad.

Being the daughter of Eros isn’t all it’s cracked up to be. For one thing, a girl can get jaded when her parents have the most beautiful and fatalistic love story in history. For another, immortality royally sucks when the Oracle condemns you to eternity in the wrong profession. Do the Gods care that Kali wants to ditch the love stuff and be a muse?

To reclaim her heart and her destiny, Kali is left with no choice but to defy the Gods, tempt the Fates, date the mortal love-of-her-life, and hope she doesn’t lose her best friend, Hector, in the process.

QOTD: What kinds of books do you like reading while on vacation?