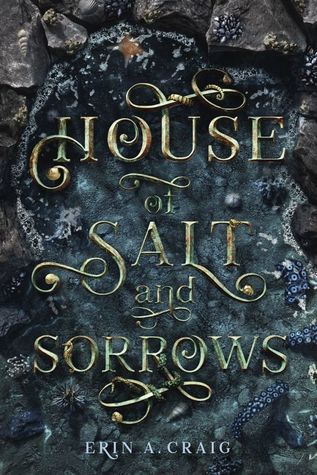 Title: House of Salt and Sorrows

There will be spoilers in this review, but there will be a spoiler-free section first. I also what to thank NetGalley for gifting me an early copy of this book, in exchange for an honest review.

I absolutely loved this book – I expected to enjoy it as it’s a unique take on the 12 Dancing Princesses story – which is so underrepresented in YA it’s criminal. But what I didn’t expect was just how much I was going to love it and am kicking myself for not having read it sooner than right before its release. I knew the moment I finished the book that it would be a five-star read and I would be pushing it on everyone, so here – read the book! I do have one tiny complaint and maybe I just missed it in the book, but I’ll get to that shortly. It obviously doesn’t affect my rating and as for the plot as a whole, it doesn’t really affect how it all plays out in the end.

Okay, little side note, I’ve legit been sitting here trying to write this review for about three hours and I’m struggling. I think it’s because it’s all still so fresh and I legitimately just want to scream GO READ THE BOOK as well as just spoil the book to get my feelings out. Like, if you’re talking to a friend about a book – that way. I just want to gush about this book and how much I loved it, and I undoubtedly will in this review, but I also want to be kind of constructive and cohesive and not just a mess of emotions. I don’t normally write reviews so soon after finishing a book for this reason (albeit there are exceptions), but it’s my fault for waiting so long to read it. So, let’s try this again.

It was amazing. I thoroughly enjoyed it and definitely didn’t see the twist at the end. I wasn’t sure who was behind the mystery that plays out in this story, but I did not see that person being the suspect. I liked being kind of blindsided at the end. I also really enjoyed the frenzied panic feeling that I felt towards the end. I was completely encompassed by Annaleigh – the main character. One of the eight surviving Thaumas Dozen, she’s willing to do anything to protect her sisters, willing to go to any lengths.

House of Salt and Sorrows follows the usually plot of a 12 Dancing Princesses story – usually the sisters love dancing, find a magical escape where they can dance the night away, shoes are usually worn out super-fast and then the magic and splendor turns sour and something darker comes in to play. But there’s a twist. The eight remaining sisters are “cursed”, and their lives are already somewhat dark. Annaleigh tries to make the best of horrible situations, and wants to properly honor her dead sisters, but with the arrival of a new stepmother (thank god she wasn’t the traditional evil stepmother type character – I’m kind of over those) Annaleigh doesn’t like the changes that are happening. She goes along for the sake of her remaining sisters, but privately she doesn’t stop mourning. There’s also this role of Gods that make appearances among the mortals and are very much keyish players in this book. I wasn’t really expecting that element to be so prevalent, but I ended up really liking it.

Enter Cassius and Fisher – the love interest and the crush.

Annaleigh and Fisher grew up together, so it’s kind of the boy next door relationship, and for a second, I was hoping something would happen between the two of them. I’m a sucker for friendship turned to romance. But then there was Cassius and I was a goner. Utterly swoon-worthy and charming, he caught Annaleigh’s eye, and he, hers. I was pretty much a goner for Cassius the moment he was on the page.

As for Annaleigh, I really enjoyed her as a character. She wasn’t perfect and she had her flaws, but her absolute love for those she held dear- it was endearing. She’s such a strong character and is pretty confident with who she is. Due to circumstances in the book, there are moments that cause her to question who she is, her sanity, but there’s always this underlying strength that shines through.

If you go into this book not expecting some darker themes and unsettling moments, you’ll be blindsided. I wouldn’t necessarily consider it horror, but there are some horror elements, and while I did feel the panic and frenzied feelings that Annaleigh felt, I was never scared to read ahead…I should clarify. I’m not a horror person, I don’t like being scared like that, I don’t usually touch any format of horror – whether movie or book – that deals with hauntings/ghosts. I don’t do that shit. Scares me too badly – like won’t sleep for a week, leaves lights on and watches happy Christmas movies until I feel safe. So, while this is a gothic horror YA story, I was able to read it and not be terrified. I think since there was a fantastical/magical element in the book I could equate it with fiction in my head.

Overall, if it’s not obvious I really loved this book and though the author did an amazing job with the world, the characters, the story. I found it so easy to imagine the world, the characters, the different settings. Everything was so vivid in my mind and I’ll definitely be buying whatever stories Erin publishes in the future. My finished copy is supposed to arrive on Thursday, and I cannot wait to put it on my shelf. I can definitely see me rereading House of Salt and Sorrows in the future and I may even make my book club read it in the future. If you’re looking for a new read and want something darker, grittier, with a hint of fantastical, loving relationships and a swoon-worthy love interest, make sure you pick this up tomorrow or sometime in the near future, because you do not want to miss this book!

Okay, if you’ve read House of Salt and Sorrows, feel free to comment with your reaction, though I would ask you to not post spoilers – but my DMs on Instagram and Twitter are open! If you want to talk about this book, feel free to message me there! @lexacourtney on both accounts!

Okay, now for a slight spoiler.

Phew, I haven’t done one of these reviews in a long time – at least not in this format, but I need to get something off my chest.

I know I said earlier it was one thing that bothered me, but as I was writing and thinking, something else came to me.

First off, I was kind of confused as to the whole plot line involving Eulalie, surrounding her death. Trying to figure out who killed her was basically Annaleigh’s whole purpose for like 75% of the book and once Edgar (Eulalie’s love interest) is killed and other elements start coming to light, she just forgets about it? I mean, she even went as far to accuse Cassius of murdering them, but he has his own reasons for knowing so much about her sisters. Maybe I missed it in the book, being too caught up in everything Annaleigh was going through, but I’m almost certain nothing came of that? Because the person/thing behind the torment Annaleigh faces and goes through admits that Eulalie’s death isn’t their fault. Annaleigh even goes to question if she is the one who killed her.

I know that’s kind of vague and out of context, but even though this is the spoiler section, I don’t want to give too much away. Also, quite honestly it would be kind of hard to explain without explaining the whole plot.

Anyways, maybe I just missed it and it was determined who killed her, but I don’t remember it ever being stated. Though, in the scheme of things, Annaleigh’s life, and her sister’s lives were in immediate danger and things were happening quickly, so it makes sense that, that would move to the back burner of things that are important.

Though, and I just thought of this, maybe Cassisus’s explanation of how he knows her sisters, and her (Annaleigh) was enough closure for her.

As for the second thing – and this isn’t an issue or anything, but just something I want to talk about, since while I was reading, I couldn’t figure it out, but Fisher.

Yes, he’s the childhood friend, turning potential sweetheart, but while Fisher is mentioned before Cassisus, Annaleigh interacts with Cassius, and there’s chemistry, before Fisher comes into play.

Cassius then disappears for a bit, and Fisher is there, complimenting Annaleigh and being all “I’m unable to take my eyes off of you” and “I didn’t like seeing you dancing with another guy”, but he never really acts on his feelings. He doesn’t act like a territorial asshole, and when he makes a move, he instantly apologizes and then it’s awkward between the two of them.

Annaleigh has always had a crush on Fisher, and seemed to be open towards the idea, but the fact that he drastically backs off and then spends a lot of time with her older sister – I guess, I just couldn’t figure out why he was even introduced as a potential love interest, when Annaleigh and Cassius had sparks from the first meeting, and it was obvious that he was the destined love interest.

Eventually it’s revealed as to why Fisher acted the way he did, and then I wasn’t questioning it anymore. His actions were all part of a much larger scheme. I won’t spoil how it all make sense, as it’s a pretty massive and dark reveal. Got to keep some things secret, don’t want to spoil the book for you all.

5 thoughts on “Book Review: House of Salt and Sorrows”