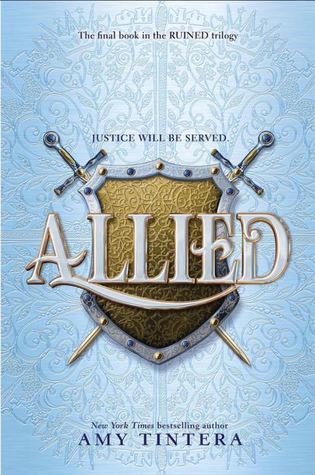 In the final book in the New York Times bestselling Ruined series, the romance of The Selection and the epic stakes of Red Queen come together in a story of revenge, adventure, and unexpected love.

Emelina Flores and her sister, Olivia, were determined to bring peace to the people of Ruina. But as the war for liberation raged on, what triumph and freedom meant to Em and Olivia slowly changed. As Olivia’s violence and thirst for vengeance became her only ambition, Em was left to pick up the pieces.

But it’s not only Em who is upset by Olivia’s increased violence. Other members of the Ruined army are beginning to see the cracks, and soon a small group of them defects from Olivia’s army and joins Em instead. The two sisters are soon pitted against each other in an epic battle for the kingdom and the future, and only one will win.

This is going to be a mini spoiler free review.

I have FINALLY finished this book and I’m so excited. The reason it took me so long to finish the last book in this fantasy trilogy is because I was waiting for the audiobook to come out. I really enjoyed the narrator and knew that I wanted to listen to the last book.

This was a really good conclusion for Emelina and Co. I really liked how it ended, and things happened that I didn’t expect. But overall it was a pretty chill ending for a fantasy series. The characters definitely grow on you and feel for them. Emelina goes through so much, but by the end, everyone gets what they deserve. Characters that you don’t expect to become friends do and will ultimately do anything for each other. The romances between characters were explored. I really liked how none of them were even remotely insta-love-y. All these characters mess up, have faults and while the significant other’s may be upset, they communicate and trying to work through everything.

The writing was amazing as always, and this finale definitely solidified that I will read anything she publishes. I do think this book was a tad slower than the others, but I think that’s because it shows the ramifications of the character’s actions. I think this book questions the validity of right and wrong, or more so who is viewed as right and wrong. History is written by the victors, but that doesn’t make actions okay. The characters in this series, especially this final book have to face consequences for their actions, and unfortunately the actions of their parents.

As a finale, it’s probably one of my favorites because it doesn’t end how an epic fantasy normally ends – with the reclamation of a throne. It ends with almost a new world order and the hope for a better tomorrow.