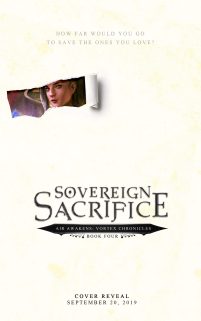 Another new Elise Kova book? YES! It’s the fourth book in the Vortex Chronicles Series! And, before you ask, NO you don’t have to have read the Air Awakens Series first…though I highly recommend you do read them at some point because they are simply fantastic! And, even better news – it’s out really soon – October 15, 2019!

So much has happened in the series so far, and this cover makes me so excited for what’s to come! The ending to Failed Future blew my mind and I cannot wait to see what happens to Vi next! This series has quickly become a favorite (like its predecessor) so be ready for a whole lot of screaming!

I’m sure you’re all thinking “just show us the cover already!” but you’re going to have to bear with me for a moment longer. I thought Failed Future was my favorite cover in the series, but this cover…the colors, the characters, the promise it holds…

Sovereign Sacrifice‘s cover is definitely, by far, my favorite in the series! But, I say that each time a new cover is revealed. They’ve all been so dang good!

Now, all she knows is that she has deadly magic and brutal cunning and she’s ready to settle some scores.

Old loves and new allies tell her to play it safe. But Vi is done with caution. She has a chance to right ancient wrongs and this princess-turned-warrior isn’t turning back.

She’s going to bring an end the vortex the world is trapped in.

DOESN’T THAT MAKE YOU SO EXCITED??

Though I suppose if you haven’t read the first three books, then probably not, and that’s something you should rectify as soon as possible.

Well, here it is! The cover of the Vortex Chronicles, Book 4, Sovereign Sacrifice! 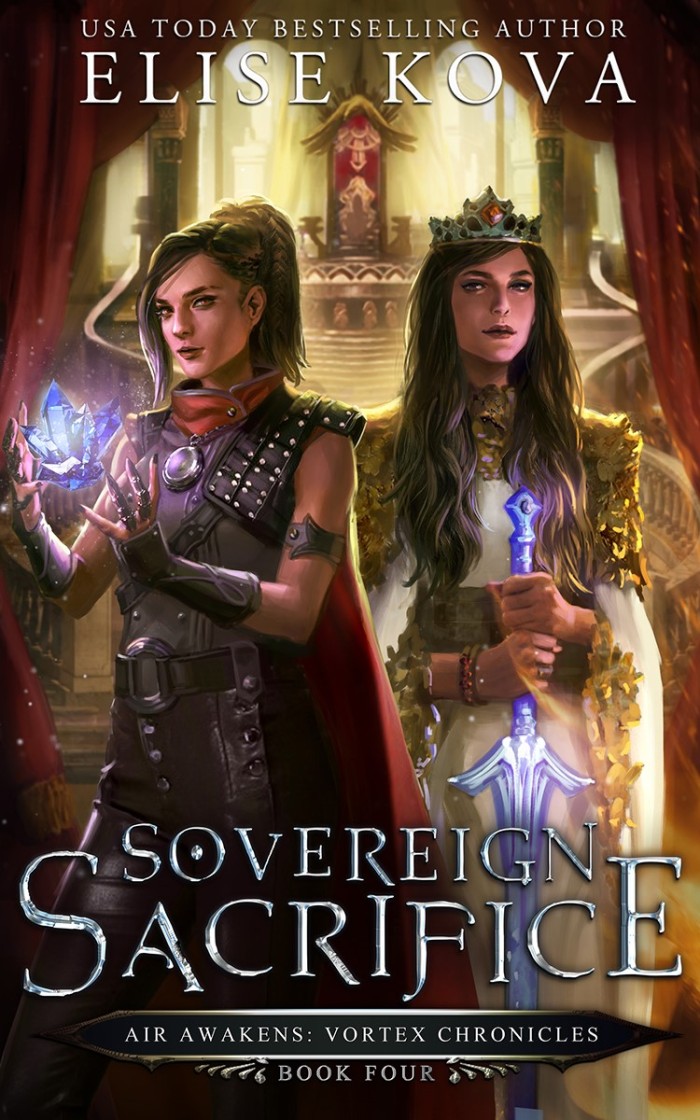 I just love it! I love how badass Vi looks…and I won’t spoil who the other woman is – you’re just going to have to read the books. Telling you could potentially ruin the ending of Failed Future and I’m not going to be the one to deprive you of the shock that comes with reading the ending.

Now for all the *other* important information, even though you definitely came here to see the cover, but you’ll want to know this stuff.

Note…It is only available through Amazon. But if you have a nook or kobo you can purchase through Amazon, email Elise proof of purchase to Elise.Kova.Author@gmail.com, and then she’ll send a personalized “read anywhere” link to you!

The giveaway is for 10 signed books Elise got at Penned Con 2019. Of which, VORTEX VISIONS (Air Awakens: Vortex Chronicles, #1) is one! This giveaway is open internationally to 18+ readers and ends October 6, 2019.

Also, make sure you add Sovereign Sacrifice (and the other books in the series) on Goodreads!

As a final note, I want to thank Elise for allowing me to be a part of this once again. I absolutely love helping to promote these books and any of her works. I do believe that everyone should read them and my hope is that I convince at least one person to pick up these books and give them a chance. So, thank you so much Elise for letting me help spread the hype and confessing my love for these characters and your books. It means so much.