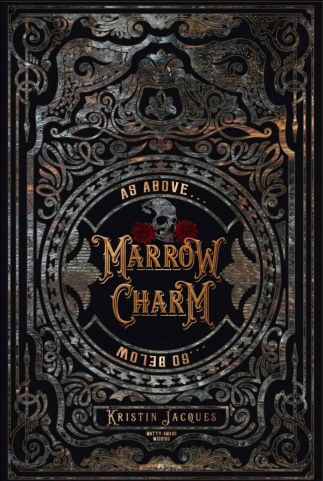 ‘In his pursuit of the occult, the Third Reich opened the Gate to a realm of magic and brought the world to ruin. The Gate was eventually closed, but They were already in our world and They were hungry.’

-The Lost History, Library of Avergard

Azure ‘Azzy’ Brimvine lives in a world decimated by magic, where humans have retreated underground from the overwhelming dangers of the surface. But Below is no safer than Above.

Magic borne plagues continue to eat away at the remaining human cities, a sickness that doesn’t merely kill, but creates aberrations from the stricken: people twisted by magic into something dark, dangerous, and powerful. It is an existence of fear and constant dread. When Azzy’s brother, Armin, is infected and cast out into the Above, she sets out after him, determined to be there for him no matter what he becomes.

The world Above is full of monsters, both wild and cunning, some more human than Azzy was led to believe. Armin is captured and bound for the Auction block of Avergard, a ruthless city of inhuman lords and twisted creatures. To reach him, Azzy must brave the perils of the Above and the chaotic life forms created by the Gate. To reach him, she must find allies and forge new bonds in this broken world.

And Azzy must reach him, before Armin’s new power is used to open the Gate once more.

This will be a spoiler free review. Free copy of Marrow Charm provided by NeGalley in exchange for an honest review.

I had no expectations going into this. I saw the cover, it’s gorgeous, then I read the synopsis and thought that it sounded interesting. I requested it not even thinking that I was actually going to be approved, and I’m so glad I was. This is honestly a new favorite and I’m trash for Azure and Kai (the love interest) and I want them to be happy.

Marrow Charm is dark, gritty and unforgiving. Humans live underground after magic had (basically) ransacked the surface. Six cities, all havens for humanity but they’re falling. Azure’s (Azzy) home, Heaven, or better known as the Heap is struggling. A sickness called “The Rot” has steadily culled the cities population over time and the remaining humans are struggling to survive. Hope is all but nonexistent and choices have to be made in order to keep everyone alive. When meat is scarce…you don’t waste a single death.

It’s uncomfortable and a turning point for Azzy. Things are set in motion after one feast and they do not stop rolling even by the end of the book.

Azzy is badass. Even when the odds are stacked impossibly high against her, she keeps moving forward. She’s super capable but not invincible. She has many moments of weakness where she wants to give up, but she knows if she does, she’s dead. She knows that finding her brother may be the last thing she does, and if and when she does, he might not be the person she knew.

This book was amazing and the bonds that are formed between Azzy and the people she meets are raw, real and honest. She’s very much a girl who is willing to face anything, go the distance, but is also very much out of her element. Death scares her in the sense that it terrifies most people, but she also understands that it’s a very real possibility. She’s one to put herself in harm’s way to protect those she cares about.

Her bond with Kai is * chef’s kiss * perfect. At least in my opinion. It’s one that grew out of debts being paid, but also so much more – feelings that cannot be explained, that run deeper than given words can explain.

I fell in love with the two of them on their journey. They have a fierce protectiveness for each other and the more invested I got, the more my heart raced and the louder I screamed at the end of Part 1…okay it was like 3AM so I didn’t actually scream (audibly) but it felt like my heart was torn from my chest. I need to know if Kai and Azzy are okay because their current predicaments aren’t exactly great. Hell, no one’s predicament is great at the end of the book which leaves me with this feeling of dread and anxiety for what’s going to happen next and I have to wait until May 2020 to find out.

I’ll just be over here in the corner dying.

Much like [redacted] – go read the book if you want spoilers!

This is my shout out to you all to read this book and fall in love.

You know that feeling when you’re reading a book and you get that bubbly, giddy feeling in your chest and you find yourself grinning like a fool because the book is so good and the romance is so good? and you just want to keep reading because you HAVE to know what happens next? That’s how I felt while reading this book.

Marrow Charm is out now! Make sure you pick up your copy and read this book! Fall in love with Kai and Azzy and get invested in her journey to save her brother! Make sure you add it on Goodreads as well!