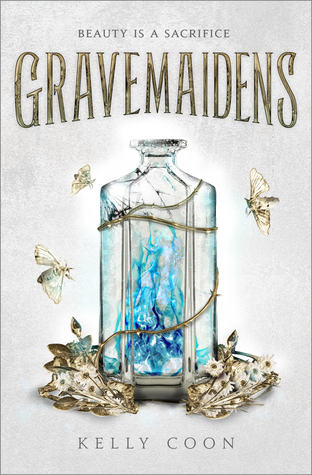 The start of a fierce fantasy duology about three maidens who are chosen for their land’s greatest honor…and one girl determined to save her sister from the grave.

In the walled city-state of Alu, Kammani wants nothing more than to become the accomplished healer her father used to be before her family was cast out of their privileged life in shame.

When Alu’s ruler falls deathly ill, Kammani’s beautiful little sister, Nanaea, is chosen as one of three sacred maidens to join him in the afterlife. It’s an honor. A tradition. And Nanaea believes it is her chance to live an even grander life than the one that was stolen from her.

But Kammani sees the selection for what it really is—a death sentence.

Desperate to save her sister, Kammani schemes her way into the palace to heal the ruler. There she discovers more danger lurking in the sand-stone corridors than she could have ever imagined and that her own life—and heart—are at stake. But Kammani will stop at nothing to dig up the palace’s buried secrets even if it means sacrificing everything…including herself.

This will be a spoiler free review. There are a few semi-graphic scenes in this book.

This book ended up being different than I thought it was going to be. To be totally honest, I’m not sure if I ever read the synopsis or just knew I had to read it based on other people’s reviews and the hype. I’m also in the middle of a horrible reading slump but was able to make my way through this book. Overall, I enjoyed it, but I’m not sure if I would have enjoyed it more if I weren’t in a slump. It also took me about half the book to realize that one of the characters I thought I didn’t like, was false, and it was actually because I didn’t care for the MC.

I also want to say that I much more enjoyed the second half of the book, and I’m actually kind of excited to read the next one. I’m really curious as to how it will all end.

I felt a little bored by the first half, and sometimes I felt like I was sure of what was happening. I feel like that could be a good thing, since Kammani has no clue as to what’s actually happening, and only has theories.

There are also some very bad and hateful people in this book, and I hope they all meet their demise in book 2.

At the beginning of the book I thought Dagan (the love interest) to be a bit absurd, and he doesn’t wear a shirt like at all. He’s swoony, caring and deeply in love with Kammani and it’s cute. But I found him to be a bit annoying. Though my thoughts on him have vastly changed. I still think it’s weird that he went to a festival shirtless, but okay.

Nanaea is your average 15-year-old girl – annoying and moody as hell. I couldn’t stand her, and that probably because she’s a super accurate representation of a real teenage girl? Was I ever that annoying, if so, Mom & Dad I apologize. Everything was drama with her, and she didn’t listen. Ultimately her reasoning comes out, and while it makes sense for her character, it’s misguided. She’s an accurate teen, but annoying as hell. I’m interested in seeing what part she plays in book 2.

I’m conflicted about Nasu. Part of me wants him to be a potential Love interest for Kammani, but the other half of me doesn’t want that at all, and I just want them to be really good, die for each other friends. But their relationship seems to hint at him having feelings for her.

I loved Iltani, a devious little mischievous mind. She’s the best and so loyal. I wish she’d been in the book more, but my hope is that she has a bigger role to play in the next one.

I wasn’t sure about Nin Arwia, but I’m glad that she’s with the group. Like Kammani, her journey is far from over and it’ll be interesting to see what she ultimately does.

And finally, Kammani. I’ll be honest, she’s not my fave. As a character, I thought she was very immature, and it was annoying how she strung Dagan along. She tries playing adult and it backfired every single time. But I think that’s also what makes her character so great – that she plays being a grownup, shouldering burdens and trying with every ounce of her being to set things right. But in reality, her world is crumbling around her and there’s nothing she can do about it. She never just let’s herself be or be happy. She feels like she can’t, and it nearly costs her everything. Instead of being rational and taking the time to come up with a plan that isn’t guaranteed to fail, she rushes in headfirst every time. For the adult she pretends to be, she basically ignores every piece of sound advice given to her.

This book is definitely a ride and the world Kelly has created is rich and vivid. It’s cruel and wonderful. It’s accusatory and forgiving. The characters exist in a world where status and traditions are highly honored and praised, and to be outspoken against them is tantamount to treason. It’s about realizing that the thing we might want most in the world, aren’t actually what we want at all. Sometimes facing reality is the hardest thing we can do. That accepting help, instead of shouldering everything yourself is the best thing, because when there are people in your corner, your chances of succeeding are much higher.

It about fighting for what’s right and learning from your mistakes. These characters aren’t perfect, and they have a hell of a lot more growing up to do, but I’m anticipatingly waiting for the next book. While I wasn’t a fan of every character in this book and thought the second half was better than the first, I definitely understand the hype and I hope you all pick up this book and check it out! If anything, read it to fall in love with soft Dagan who wants nothing more in the world to marry and cherish the girl he loves, and give her everything and anything she could ever want…Kammani, if you don’t want him, send him my way. 😂

Check out Gravemaidens, out today!