I’ve definitely had too much wine writing this, but here we go!

I’ve lost the plot – or at least I think I have. I’m not entirely sure. This WIP isn’t doing anything that I expected or anticipated it doing. But before I jump into WIP issues, let’s talk about how much I hate the new NaNo site.

It’s glitchy as hell, crowded and almost impossible to use. Also, speaking of glitchy any time I open up the site, my Years Won and Streak numbers reset to 1 every single time. This is my 9th year!

It’s actually running my drive and excitement for participating. I don’t feel the urge to update my word count – which is something I’ve always loved doing each year, “oh I wrote 500 words, let me track them, and see the bar graph get higher!”

I don’t feel that this year.

I’m still updating, but only because I don’t want to mess up my stats, but honestly, I would love it, if they fixed it. I don’t need to be able to tell my buddies how I’m feeling, or how many words per minute I write – which is apparently somewhere between 4-5 per minute according to the site.

At that rate, it’ll take me MONTHS to finish this WIP. I don’t really care about my daily average, especially if it’s not going to auto adjust if I’m ahead of schedule. I don’t see why I need to have the option to sow/tell people where I write, and at what hours. All these gimmicky add-ons legit do nothing but kill my battery.

You also can’t go back and add in word count numbers from a previous day, if for whatever reason you forgot to update the site or weren’t able to. I don’t know about you, but even if the clock strikes midnight, my “day” isn’t over until I go to bed.

I’m just so deeply unhappy with the new site. They had a perfect word tracker, and they broke it. I just want it back. 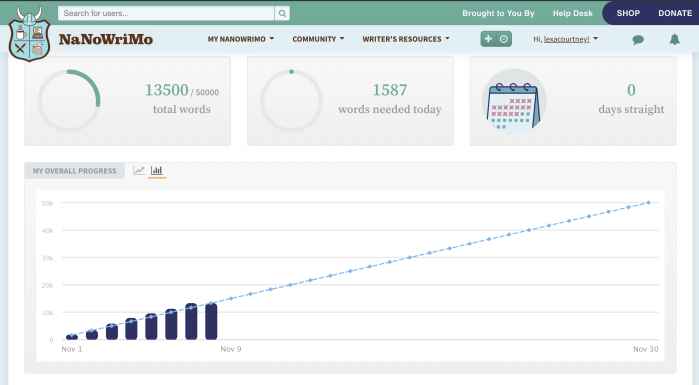 Now, onto the actual WIP portion of this update – I’m currently sitting around 13,500 words and I don’t even know if there is a plot. And if there is one, I don’t know what it is. This WIP is a mess, but I’m going with it. I know for a fact that there is what is basically an entire chapter (or two) that should not be happening at the beginning of the book, but more like at the 75-85% mark.

I knew that after writing it, but it’s only my first draft, so I’m trying to be forgiving and again, just go with it.

All four of my main characters were sad and very angry beans for the first few chapters, but I’m legit forcing them back into the fluffy rom-com mindset that I had for this book. None of them – well, all but one – aren’t acting like I anticipated, but I’m pretty sure that’s because of that massive scene that shouldn’t be at the beginning of the book.

I honestly don’t know where this story is going to go, and I might just keep writing fluffy scenes even if they don’t go together.

I should also probably mention that this is my first time trying my hand at a contemporary story – i.e. more than a few thousand words. It’s kind of easier, and kind of harder than I anticipated. It’s also harder because I’m trying to incorporate some real events that happened to me. That and the whole premise of a family beach vacation is based on my own family beach vacation. It’s weird giving Cassie (one of my MC’s and arguably the main one) events that have happened to me, because she’s very much not me. It’s a kind of a weird disconnect.

Overall, I don’t hate what I’ve written, but I know it’s not good. It needs work and a plot, but that’s just going to have to come later.

My goal next week is to be better at daily updates on Insta – because I have yet to do one LOL.

Also if you want to meet my characters, you can check out this post – where I created them in the Sims 4!

Let me know how your NaNo WIP is going!