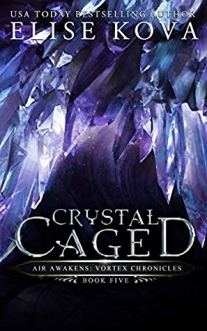 From the title of this post, you already know what’s coming. Today Elise dropped the final cover reveal for the Vortex Chronicles Series and it’s fucking amazing. I’m fickle as hell when it comes to covers, they’re all my favorite. Each one she’s released has been my *new* favorite, but y’all, this one might take the take. It’s so bad ass, so amazing, and the contrast between warm and cool colors…I’m screaming. Vi looks incredible and ready to take on the whole world.

I’m so excited to see how this series ends. I was nervous, but now…now I’m just so fucking excited.

Crystal Caged is the fifth and final book in the Vortex Chronicles and phew, so much has happened in this series. Vi has gone on the journey of a lifetime…lol

You’ll have to read the series to find out why that statement is funny. You should also just go read these books because Elise is a freaking master at creating these intricate, diverse, page turning fantasy books that leave you wanting more. For that matter, you should also check out the Air Awakens series and follow Vhalla and Aldrik in their fight to save the world…

Saving the world is clearly a family business.

I’m sure you just want me to get to the reveal – even if you’ve already seen it on Twitter and various other social media sites, and I promise, it’s coming very shortly! It’s so gorgeous and I promise that the suspense is well worth it.

Let’s recap really quick, shall we? After all, this is the final cover reveal and should be viewed alongside the other amazing covers in the series. 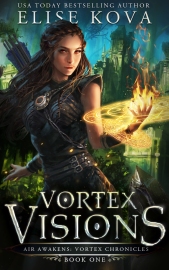 All eyes are on her and Vi must make the hardest choice of her life: Play by the rules and claim her throne. Or, break them and save the world. 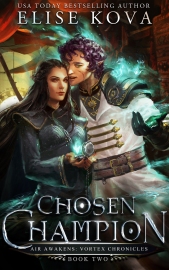 The only path for Vi is forward. But she doesn’t yet know if she’s running toward salvation… or a brutal end to everything she loves.

Old loves and new allies tell her to play it safe. But Vi is done with caution. She has a chance to right ancient wrongs and this princess-turned-warrior isn’t turning back.

She’s ready to bring an end to the vortex of death the world is trapped in.

One way or another… she will be the end of the world.

With powers that weren’t supposed to be touched by mortal hands, Vi Solaris is determined to free herself and the world from the deadly vortex it’s trapped in. This mission has taken her to forbidden lands and has transformed her from a sheltered princess to a fearsome warrior.

But the ultimate triumph requires the ultimate sacrifice, forcing Vi to choose between the last tethers to her humanity and the very people she’s sworn to protect.

If you aren’t, it’s because you haven’t yet rectified the fact that you haven’t read this series yet and you should really get on it.

And here it is, in all this epic glory – the cover for Crystal Caged, Air Awakens: Vortex Chronicles #5!

I love it. I love how badass Vi looks. I love how Raspian towers over her, threatening, menacing, but Vi is so fucking ready to take him on, it’s fantastic. I love the contrast of the cool and warm colors, they draw your eyes in and then they start roaming. I cannot wait to see this cover in person, on a physical book. This is easily my favorite cover in this series – yes, I’m aware I’ve said that about every cover, with every release. This cover is perfection and paints a picture of what’s going to go down in this book. It’s the fight for the world, and if Vi doesn’t succeed…

Well, again, you’ll just have to read the series to find out the stakes.

Add on Goodreads: Make sure you add it to your shelves!

You can check out the full giveaway post over on Elise’s Instagram – you could win limited edition special swag: journal, candle, pouch, sticker and a signed hardcover of Vortex Visions. It’s open internationally. Giveaway closes on the 18th.

As a final note, I just want to say again, that I love being a part of these reveals. I love promoting these books and Elise’s other works. She’s one of my favorite authors, and I’m so grateful that I stumbled across her books. I really do implore you to pick up Air Awakens or Vortex Visions and start reading. The great thing about the Air Awakens world is you don’t have to read the series by publication date! Personally, I’d recommend reading them Air Awakens, Golden Guard Trilogy and then Vortex Chronicles, but Elise has made each series capable of standing alone, and you can start with any of them! Though, I do recommend you read the books in each series is published order…otherwise you might be really lost.

I really hope you pick up these books and fall in love! I will forever be screaming about them and Elise’s works, so be prepared!