It’s a thing all us book hoarders…I mean lovers have to do from time to time.

We run out of shelf space, realize that we just don’t want whatever book anymore, or have too many copies, and who needs 10 copies of the same book?

That last example, I don’t know her.

I don’t hoard…I mean collect multiple copies of the same book…nope. Not me.

I’ve been meaning to this post for a while now, and for whatever reason I kept putting it off and never getting around to doing it. Well, now since I lost track of time, and was feeling good about being ahead on posts, I’m scrambling, and it feels as good a time as any to do this post.

I don’t actually have that much I’m currently trying to unhaul. It’s shocking and amazing.

They only fill one storage bin…that I can’t currently close. It’s like one book too full.

Okay, so maybe I do have a bunch, but compared to what I had before (the bin, and three boxes worth, one bin is nothing.

I actually just recently took a bunch of the books that I’ve been struggling to sell for years now and boxed them up for donation. I really just want them out of my house, and if someone else can use them, then I’m happy with that. They’re being picked up on Thursday, along with a bunch of other items. I can’t wait for them to be out of my house. 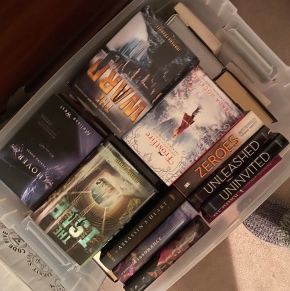 But, as all you book hoarders – sorry, book collectors know, books are expensive and recouping even a few dollars is preferable…and why not try and make a few bucks.

My room is just about overflowing with books – I spent like 2 hours rearranging some of my shelves last night. It’s weird when I look at my shelves now, because some of them look more crowded, but then I remind myself, that all my books are just more evenly spaced out now, and everything isn’t just haphazardly piled on one shelf.

But I feel like I’ve reached this point of, all the books on my shelves are ones I want to keep, have plans on reading. There aren’t many, if any, that I actually want to get rid of.

I think that I really just want to box some of them away for when I have my own house, with a dedicated library room. I just don’t want some of these books on my shelves right now, but I don’t want to get rid of them. But right now, I’m just stuck with them on my shelf.

There’s also the dread of even trying to sell them, because in my experience, unless you have big names, special editions or are just really lucky, it’s so damn hard to sell books.

Anyways, I have a bad habit of digressing.

I do want to add that, I’m not posting these books in a direct attempt to sell them. I really just ran out of ideas, it’s been a day, and I thought, why not, this wouldn’t be a hard post to quickly put together. I also do monthly Haul posts, so I figured it was time to finally do the reverse, so here it is! I’d love to be able to sell these, but I bet I ultimately end up donating them in a few months.

But if you do see something you want, feel free to message me, or email me at writingtheuniverseblog@gmail.com, or even DM me over on Twitter. If I can get these books into the hands of people who want them, that’s definitely preferable!