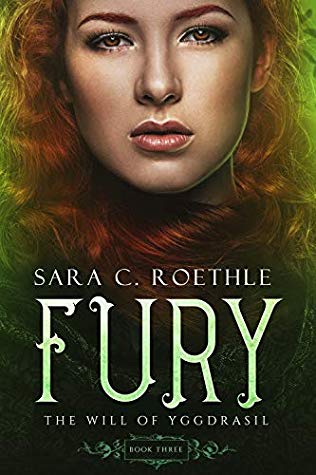 Title: Fury (The Will of Yggdrasil #3)

When you play with gods, you get burned.

Madeline can’t run forever. Estus still wants the key, and now thanks to Mikael, she’s a bigger target than ever. The only choice left is to summon the old gods for aid, risking the chance they might sooner destroy them all, than help them harness the key’s power to defeat their enemies.

Madeline is willing to take the risk, though gods can be finicky, and if there’s one thing she’s learned, it’s that no one does anything for free.

This book suffered from middle book syndrome. Basically, nothing happens during the first 45% of this book. At least nothing of major consequence. War is looming, and Maddie and Co. have been on the run and hiding out.

Hiding is the main focus of the first half of the novel.

It gets a little boring after a while.

Even when things pick up during the second half of the novel, I felt like the world building was being altered to fit a new narrative. I just felt a disconnect with the characters and the plot, and suddenly people were seemingly acting out of character.

Again, I think the biggest issue with this book is just suffers from middle book syndrome. It’s just a filler book to get us to the next one. There was also no real progression with any of the character relationships, despite the new information that gets revealed about certain characters. And aspects of Maddie’s power are revealed or hinted at that just seemed strange?

Maybe I’m just woefully ignorant on Irish folklore and mythology (the series pulls inspiration from it) – I’m not discounting that. I don’t know really anything about it, so this could all be quite common knowledge. But as for a reading experience, this book just left me feeling a little bored and a little skeptical.

Did I already buy book 4, because I’m too invested at this point?

It’s already loaded onto my Kindle. I’m too deep into this story to give up now.

I talked in the last review for this series about an element that I’m not a fan of, and I’m still not a fan. I think it’s going to cause problems. Also, there is a death in this book that felt incredibly cheap and so unnecessary. Like, I’m actually kind of annoyed that this character dies. It served no purpose, at all. Just thinking about it is actually making me angry. I didn’t have such a strong reaction when I read it, but now, thinking about it…what the fuck. I’m angry.

The uselessness of the death reminds me of Beth’s death seasons ago in The Walking Dead. It served absolutely no purpose.

I’m also starting to root for a different love interest other than Alaric. I don’t know, I’m just not sold on him. I don’t find him irresistible or even really interesting. Which is crazy, because I didn’t feel this way for book 1&2. Sure, he’s your typic fantastical alpha male, who’s super-hot and willing to do whatever it takes to protect those he cares about. While the latter is still true, it’s like his character has been watered down.

It’s hard to explain without spoilers, but maybe the author was trying to make him more sentimental and occupy the “traditional woman role” of pining, of needing to be protected. But to me, it felt more like his character had been watered down. Like the spark or something was gone.

But yeah, there’s another guy that I’d totally be on board with Maddie being with…if not for that stupid freaking plot element I hate.

I don’t think this book is the strongest in the series. Granted, that could change, I have 2 more books to read. But based on what I read, this was my least favorite. When I finished book 1, I couldn’t wait to read book 2, and same when I finished book 2, I couldn’t wait for book 3. Right now, my feelings are ‘I’m too invested now to not finish this series’, but I don’t feel this pressing need to start it right away.

Overall, I’m still a fan of this series, the world, the characters, and I’m interested in finding out what’s coming next. Once again, the stakes are higher, new powers have been unleashed and it’s up to Maddie and Co. to basically save the world. If you’re interested, you can check out my reviews for Fated and Fallen.

One thought on “Book Review: Fury (The Will of Yggdrasil #3)”