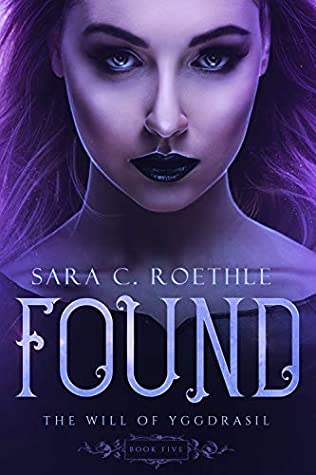 Title: Found (The Will of Yggdrasil #5)

The old gods have returned, and there will be hell to pay.

Now that Yggdrasil has been regrown, Madeline must face the old gods’ judgment. She shouldn’t exist, and they know it. The world has been irreparably changed, and perhaps the Vaettir no longer have a place in it. Madeline had thought that once she destroyed her rival she would be safe. Now she knows just how wrong she was.

Madeline will face the ultimate trial, outwitting the All Father himself. Will she survive to see her daughter grow up, or will time and fate be irreparably damaged, throwing not just earth, but all worlds into chaos?

I can’t believe I’ve read the last book in this series.

I can’t believe that I got so sucked in and invested all because of Elise Kova.

Remind me to thank her.

Overall, I’ve really enjoyed this series, and I thought that this was a pretty good ending to Maddie’s story. Pretty much everything is tied up, and what isn’t is minor and probably left open for you to imagine what comes next. A lot happens in this book, and while that’s not a bad thing overall, I do have some issues.

The first issue being that it felt like two books mashed into one. It felt like the first 50% was one book, with a lot of the fluff missing, and then the second 50% was another book with fluff missing. There were basically two arcs in this book, and they felt rushed.

Okay, yes, they ultimately tie into each other, and make sense (which isn’t surprising since it’s a series) but I wouldn’t have been mad if there had been a sixth book.

Stuff was just so rushed in this book.

My second issue is, can Maddie just choose both Alaric and Mikael…I mean jfc. I feel like this series very much makes you choose Team Alaric or Team Mikael, and honestly, I’m team Mikael. I don’t know what it is, or if I just have a soft spot for Vikings, but I just like him so much more. Maddie has pretty deep connections with everyone in her life, and she is one of those female characters, who guys just want to flock around and protect. That’s great and all, but they’re all so snarky, and sarcastic and just giant dorks, that I end up liking them all. I’m still totally Team Mikael, but honestly, there are practically so many guys to choose from. It’s a little ridiculous.

And my final issue, the very ending, how it all goes down. Like, wtf. As the ending to the whole series and everything that has happened, it’s pretty good and justified…mostly. But again, I think my main issue with the ending was the pacing. Everything happened too fast, too quickly for me to really feel the emotional weight and consequences.

I’m kind of sad to now be done with this series, these characters. I’m definitely going to miss them. On a happier note, I’m really excited to give the author’s other books a go! I’m excited to dive into Tree of Ages, which would most likely be the next one I read. If you’re looking for a urban fantasy (I guess that’s what I’d call it) with some more mature themes, hot men, Gods, magics and battles for humanity all while learning to accept yourself and not fear who you are, and finding your family, you might want to check out this series. It pretty much has everything, so you can’t go wrong.

One thought on “Book Review: Found (The Will of Yggdrasil #5)”