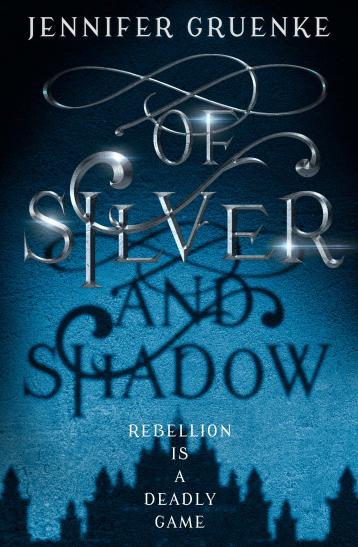 Title: Of Silver and Shadow

Ren Kolins is a silver wielder—a dangerous thing to be in the kingdom of Erdis, where magic has been outlawed for a century. Ren is just trying to survive, sticking to a life of petty thievery, card games, and pit fighting to get by. But when a wealthy rebel leader discovers her secret, he offers her a fortune to join his revolution. The caveat: she won’t see a single coin until they overthrow the King.

Behind the castle walls, a brutal group of warriors known as the King’s Children is engaged in a competition: the first to find the rebel leader will be made King’s Fang, the right hand of the King of Erdis. And Adley Farre is hunting down the rebels one by one, torturing her way to Ren and the rebel leader, and the coveted King’s Fang title.

But time is running out for all of them, including the youngest Prince of Erdis, who finds himself pulled into the rebellion. Political tensions have reached a boiling point, and Ren and the rebels must take the throne before war breaks out.

This will be a spoiler free review and thank you to NetGalley for providing a free copy in exchange for an honest review.

I almost didn’t read this.

At least, I almost didn’t read it this month. I’m so glad that I did. I mean, I’m also really annoyed because this book was so good, and now I have to sit on it for months, without any idea if there is a book 2. I really want there to be a book 2. I need a book 2. I need more of these characters, this plot, this world. I still have so many questions and if I’m being really honest, I really just want more Darek.

Y’all, I got major Anya and Dimitri vibes from Ren and Darek. So, if you’re a fan of Anastasia, you might want to check out this book when it comes out next year.

Y’all, I have no idea why I love him so much, but I do and freaking hell, why can’t fictional characters be real.

I also almost didn’t read this book because 1) the date got pushed, which led to 2) the lack of drive to read it. But dammit, I made my schedule, I’m going to stick with it. So, I sat down and opened the book.

To be honest, the book didn’t entirely grab me from the beginning. I felt that the writing style was a little stiff and a little repetitive. I kind of feared that this was going to be too similar to Diamond City – which I read earlier this year and didn’t love.

Then I couldn’t put the book down, and I think I stayed up until 5:30 reading, and I got the ending and I wanted to scream, because omfg the book is so good and the characters, and the world, and the story, and just everything. I still don’t really know how to put into words how I feel, but I can tell you that I haven’t stopped thinking about this dang book for 2.5 days and I just want more. I really want there to be more. I could easily read, 2 maybe 3 more books in this world. And speaking of more books, that’s my only complaint with this book. I felt like it could have been 2. While the book was fantastic, and I will be recommending it to everyone, a lot happens, and I wish Ren and Darek’s rivals to lovers’ relationship had been a little more ‘slow burn’. I just wanted more time in this world and with the characters and this book just felt a tad rushed.

I loved Ren, Darek, Adley and the other key players. I think if you’re a fan of Sarah J. Maas and Sabaa Tahir, you’re going to enjoy the cast of characters in this book. Ren is very much out for herself, the world cast her aside, so she casts it aside. Besides her best friend and another friend’s dream she took upon herself, she’s selfish, egotistical, rude, snarky and full of scathing remarks. She’s really good at what she does, and staying under the radar, until she meets Darek and his brother. They turn her life upside down and do nothing but cause her problems.

Darek and his brother have a plan, it’s daring, bold and just about downright suicidal, and they need Ren. She’s an unwilling participant right to the end of the book, with outside needs driving her participation, not the goodness of her heart.

Darek can’t stand Ren and finds her reckless attitude aggravating and her lack of care for the kingdom she lives in infuriating. They’re both full of heated attitude and their quiet appraisal of each other is so fun to read. I’m always down for a rivals to lovers storyline.

Whenever I think of a scene that captures their relationship, it’s this – I loved this book and I really hope that there is more to this world, more for these characters. This book is a whole story, with enough left open to feed into more books, so I need y’all to preorder and buy this book, read it, review it and promote it, so we can get more Darek and Ren. I need more Darek.

Unfortunately, Of Silver and Shadow’s release has been pushed back until 2021, but put it on your TBRs, have it on your radar. You aren’t going to want to miss this book when it finally does hit shelves. I doubt I’m going to stop thinking about it anytime soon. I’m so glad that my wariness and slight apprehension proved to be completely wrong, and that I read this book. Easily a new favorite, and if you give it a chance, it might be yours too!

2 thoughts on “Book Review: Of Silver and Shadow”