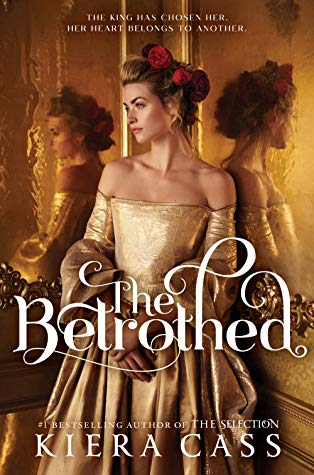 When King Jameson declares his love for Lady Hollis Brite, Hollis is shocked—and thrilled. After all, she’s grown up at Keresken Castle, vying for the king’s attention alongside other daughters of the nobility. Capturing his heart is a dream come true.

But Hollis soon realizes that falling in love with a king and being crowned queen may not be the happily ever after she thought it would be. And when she meets a commoner with the mysterious power to see right into her heart, she finds that the future she really wants is one that she never thought to imagine.

I was really excited for a new Kiera Cass book! I loved the Selection Series, so my expectations and hopes were a smidge high.

I should’ve lowered them.

So, I’m going to start with what I think this book’s issue was, because honestly, I don’t know where else to start. I think plot and character development were sacrificed for a short page count.

Y’all this book was just…I don’t know. The plot was really weirdly rushed, especially at the end. Actually, the ending made absolutely no sense, and left me wondering if Hollis was going to have 3 love interests.

The character development of Hollis made little sense. Delia Grace was horrible, and her surprise twist felt so out of place and weird? None of the characters felt like they had any depth, and their reasonings behind some of their actions felt surface at best.

Then there’s the insta love that made absolutely no sense…even for insta love it wasn’t at all believable.

Again, I do really think with a higher page count and more time with the characters and the plot to really flesh it out, this book could have been pretty stellar. As it stands, it’s just a mess. I don’t think it’s anything like The Selection, and honestly, I hesitate to recommend it. You hit this point at the 75% mark where you go from mildly enjoying to just going wtf is happening. Hollis’s character goes from vapid pretty girl obsessed gifts and the king, to having a soul deep connection, to a risk taker…all in the span of roughly 300 pages…it’s not believable.

Then her best friend, who is really more of a frenemy, let’s be honest, has this whole monologue about how life isn’t fair, and I just rolled my eyes.

It felt juvenile. Like those fights you used to have with your best friend that were just you both venting to each other about really stupid things, then you wouldn’t talk for a few days, and then everything was fine. And in the midst of fighting you both thought you sounded so mature, like you knew what you were talking about, but really you were fighting over something utterly ridiculous and one sided.

If you had a best friend, then you know what fights I’m talking about.

The Betrothed is already out. If you’re a Kiera Cass fan, you’re probably going to read this anyways. If you’re on the edge, I won’t say * don’t * read it, but I’m not fully recommending this book. If you’re curious and want to form your own opinion, go for it. I haven’t quite decided if I’m going to read book 2 yet. It is a duology so, maybe? If it’s as short as this one, then at least it’ll be a quick read.