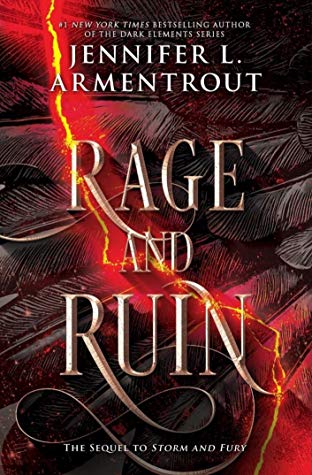 Half-angel Trinity and her bonded gargoyle protector, Zayne, have been working with demons to stop the apocalypse while avoiding falling in love. The Harbinger is coming…but who or what is it? All of humankind may fall if Trinity and Zayne can’t win the race against time as dark forces gather.

As tensions rise, they must stay close together and patrol the DC streets at night, seeking signs of the Harbinger, an entity that is killing Wardens and demons with no seeming rhyme or reason. Forbidden to be with each other, Zayne and Trinity fight their feelings and turn to unusual sources for help—the demon Roth and his cohorts. But as deaths pile up and they uncover a sinister plot involving the local high school and endangering someone dear to Zayne, Trin realizes she is being led…herded…played for some unknown end. As anger builds and feelings spiral out of control, it becomes clear that rage may be the ruin of them all.

This will be a spoiler free review. I listened to the Audible Audiobook.

It’s been maybe 10 hours since I finished listening to this book while at work, and holy crap I’m still not over the ending.

The last few chapters the hits just kept coming, and then there was that final scene, that final reveal that left me desperate for book 3.

I mean, what the frick?

There’s just something about books that pit Heaven and Hell against each other, in a battle for biblical end times that I love. Freaking give me those fallen angel/arch ngel confrontations and a scheme to create hell on Earth.

I really enjoyed Storm and Fury when I read it last year – you can check out my review here – but this one had everything. Zayne and Trinity’s relationship was so enjoyable and so much fun to experience, even when things weren’t so great between them. Their chemistry is just So Good.

Jen is the Queen at writing attractive guys, and omfg Zayne doesn’t disappoint.

I want myself a Zayne.

He’s just so good, so sweet, so caring, so incredibly thoughtful. And he tends to have an infinite amount of patience.

I just freaking loved him in this book.

She does a lot of growing and accepting in this book, but true to teenage/young adult form the things she says, or doesn’t say get her into hot water. Navigating the world, minus angelic powers and a Harbinger bringing about the end times is hard enough, so it stands to reason that Trinity has it rough.

So much happens in this book, it never stops. I’m really liking what Jen is doing with this world she created. I loved the White Hot Kiss series and that world, but this current one…it feels so deep and rich and alive.

That could be in part due to the audiobook – which I highly recommend. It legit comes straight to life in your mind. Though, I will say that how the narrator was reading Roth, wasn’t really how I hear him in my head, but still so good. She got Zayne and Trinity’s personalities chemistry on point, and it honestly felt like a movie was playing out in my mind, with a whole cast of actors.

I love the deepening development of the world, and the forces at play. I loved how Trinity masks her hurt and insecurities and fear, until she found release. That moment when the damn broke for her…it was so satisfying.

Her relationship with Zayne was so good. I know I’ve already said that, but it just was. Yes, they both made mistakes, and said some shitty things to one another, but no relationship is perfect. I’m not excusing some of the things they said to each other, because there were a few moments I wanted to smack Zayne…hard, same with Trinity.

There was a moment that Zayne said something hurtful, and made Trinity feel like her worst nightmare had come to life and just made her feel horrible and I wanted to punch him. My breath caught and I felt so sad for her. Out of context it sounds awful, and even in context it wasn’t good, but people tend to say things they don’t truly mean when they’re intensely angry and hurt and when everything seems unfair.

But they were always able to move past, because there are things more important than past words. The fact that they learn to communicate and try to reconcile says so much. I can also understand saying things in the heat of the moment due to intense anger, and realizing that “oops, my bad” but still being angry, and now feeling guilt due to the anger, and not wanting to be the first to apologize can make situations worse. When you have no experience with some things, it can be hard to realize that you’re in the wrong, or that you misunderstood, or that maybe there was a better way to handle things.

So, when that damn breaks…it was just so satisfying, and the scene was adorable. I’d probably react in very similar way if a guy did something that sweet for me.

I really liked the role Layla and Roth played in this book. And I really loved that Jen had to remind us that Roth is a Demon. A Crown Prince, bad MoFo Demon. He’s not some bad soul, turned good by love, he’s legit not a good dude. I found myself actually kind of forgetting that Roth hadn’t “turned” good. There are just some things that are more important, but I wouldn’t want to piss him off.

I love that they have a decent role in this series and weren’t relegated to background side characters. I kind of like the Roth and Trinity dynamic, and I really want to see Layla and her be friends, and share stories about Zayne, purely to embarrass him. It’ll be interesting to see how they react to the ending of this book.

Things are really just starting to heat up, the battle for the end times is on the horizon, and it looks like a curve ball (or two) just landed. I’m beyond excited to see what happens next, what the reasoning is for that final scene of the book, and if the *right side* of history is going to win.

Or is hell on Earth going to reign supreme?

Rage and Ruin is out now, and if you haven’t already, I highly recommend picking up this series, as well as the White Hot Kiss books. If you’re a fan of Angels, Demons and Gargoyle protectors, then you’re definitely going to want to check this out.

4 thoughts on “Book Review: Rage and Ruin (The Harbinger #2)”