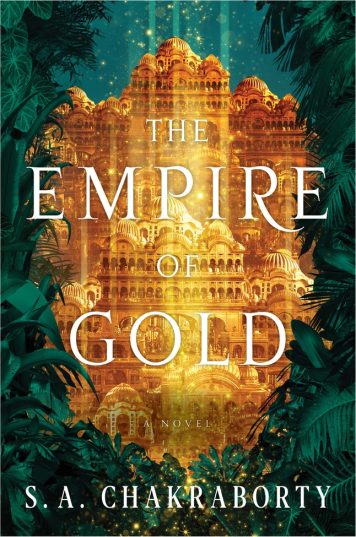 Title: The Empire of Gold

After a brutal conquest stripped the city of its magic, Nahid leader Banu Manizheh and her resurrected commander, Dara, must try to repair their fraying alliance and stabilize a fractious, warring people.

But the bloodletting and loss of his beloved Nahri have unleashed the worst demons of Dara’s dark past. To vanquish them, he must face some ugly truths about his history and put himself at the mercy of those he once considered enemies.

Having narrowly escaped their murderous families and Daevabad’s deadly politics, Nahri and Ali, now safe in Cairo, face difficult choices of their own. While Nahri finds peace in the old rhythms and familiar comforts of her human home, she is haunted by the knowledge that the loved ones she left behind and the people who considered her a savior are at the mercy of a new tyrant. Ali, too, cannot help but look back, and is determined to return to rescue his city and the family that remains. Seeking support in his mother’s homeland, he discovers that his connection to the marid goes far deeper than expected and threatens not only his relationship with Nahri, but his very faith.

As peace grows more elusive and old players return, Nahri, Ali, and Dara come to understand that in order to remake the world, they may need to fight those they once loved . . . and take a stand for those they once hurt.

This will be a spoiler free review. I listened to the Audible Audiobook, and I highly recommend it. Soneela Nankani is an incredible narrator and does this book justice. I promise you won’t be disappointed with the quality of the audiobook!

I sat on the last four hours and forty minutes of this audiobook for about a week and a half. I’d left off at a very emotionally stressful moment towards the end of the book, and I was terrified to find out what was going to happen next. I wanted to find out what happened next, but I couldn’t bring myself to actually open the Audible app.

I’m going to be honest, while narratively the ending of the book is so good, I still ended up feeling a tad underwhelmed. One, it feels like there still enough left open for more books, a novella, something. Which is all well and good, but it left me even more desperate for more than I already was. Two, emotionally I was just a tad disappointed in how some of the character relationships played out.

I understand the choices that were made, and why they were made, but with semi-heavy emphasis on character relationships – especially the ones between Nahri, Ali and Dara – I was kind of hoping for a little more. With Nahri having romatic feeling for Dara, being married to Muntadhir, and clearly having feelings for Ali, I just expected more. I know the books aren’t about *romance* but to feature it semi-heavily in all the books, I was just a tad bummed at how the relationships are handled. But that’s just me, and I’m getting ahead of myself.

This book starts off with a freaking cinematic as hell scene, and I can still envision it almost two weeks later. It picks up right where The Kingdom of Copper leaves off, and Nahri and Ali aren’t wasting any time. Things are happening at a lightning pace and their world is falling apart.

I loved the beginning of this book; the emotional weights were there. Despite what Nahri and Ali were feeling at the beginning of this book, I loved seeing them in this setting. I loved being back in Cairo, and I loved being there with the two of them. It was fun seeing Nahri fall back into the rhythms of her old life, finding familiar faces. It was even more fun watching Nahri introduce Ali to Cairo. This almost felt like a slice of life moment for them and it was so enjoyable – despite everything going on, everything they left behind.

Then you had Dara’s chapters, and oh my god. His character development in this book (in the whole series, really) is one of my favorite things. I think it’s one of the best character developments I’ve ever read. His words at the end of this book had me in legit tears. I was so sad, but also so happy for him. His chapters were heavy and kind of dark while he came to terms with what he’s done, what he did, the conflicting emotions between what he’s trained to do, and what he feels is morally right. So much of what happens to him in this book, either makes you want to shake some sense into him, because how can he be blind to Manizheh’s actual goals, or your heart just breaks.

When Nahri realizes what has happened to him, why he’s done some of the things he’s done to Daevabad…your heart shatters alongside hers. Dara isn’t innocent, but what he goes through is cruel, and you can tell that his viewpoints change, but nothing can be done.

While his chapters are heavy, most of Ali and Nahri’s feel lighter, a bit more adventurous. Yes, the cards are stacked against them, and they’re in dire straits and are going to eventually have to return home to Daevabad – they kind of take their sweet time getting there. I mean, there are legitimate reasons, but it never really felt like there was a weight really baring down on them. Arguably there was, because Daevabad is in the hands of Manizheh and she’s absolutely terrible and everything is broken. Whereas Dara is questioning what is morally right, and whether his actions at the behest of Manizheh are morally right, Ali and Nahri spend most of their time together, ignoring the fact that they have feelings for each other.

So much sexual tension.

I loved it, but it provided a very different feeling to what we read from Dara’s point of view. This is also why I’m a tad bit bummed at the unresolved feeling of the ending. Things are implied, but dammit, I want it on the page!

But, let’s switch to Ali really quick. Boy, his journey is a lot. And I definitely didn’t see any of those reveals coming. I honestly don’t know how I feel about his whole plot line in this book. I didn’t hate it, but I can’t say I necessarily loved it. I think it adds to the story, and again, narratively it’s brilliant, but I don’t know. I was just kind of, let’s get to the next POV.

I just really liked it when he was with Nahri. Ali by himself was just kind of bland. If he wasn’t thinking scandalous thoughts about Nahri, he was mourning Muntadhir and how he should have done something. Then it comes time for him to embrace his marid past he just becomes, I don’t know, self-sacrificing, annoying? I’m not really sure how to phrase it, but I didn’t find it as enjoyable. Besides that, I don’t think his character arc is horrible. He’s definitely changed since book 1, he’s more open and less stuck in his beliefs. He’s still adorably clueless when it comes to certain things, so he’s still endearing.

As for Nahri, her character arc is also fantastic. I loved her in every moment of this book. From her most vulnerable moments, to the ones where she stood out like a Goddess among men…she’s probably one of my new favorite female characters – like, of all time. She’s a survivor, a fighter and dammit, she deserves every happiness she could possible achieve and get. She was fierce as hell in the book, took so many risks and chances and laid everything out before her. She was fucking brilliant and I loved how her story comes to a close. Her words and moment with Dara at the end had me crying. So perfectly emotional, and kind of the best way to somewhat mend everything between them.

Though, again, it did feel like it was left open just enough, that maybe there could be more?

As for Jamshid, Muntadhir, Zaynb and everyone else who wasn’t Manizheh – I loved them. I loved how they all had bigger roles, bigger stakes. Jamshid is still so precious and I love him. I love how protective he is of Nahri. Muntadhir proved that he’s kind of a badass, and not just this pampered Prince. He’s definitely pampered, but he stood his ground when it counted, when everything else was taken from him. And Zaynb…phew. I didn’t expect that of her. I don’t really think I had any expectations, but I didn’t expect her to step into that role. From her first introduction, to where she ends up in this book…it’s such a change and it’s so good.

Really, every character in this book – well, the main cast really – had some awesome character transformations, flaws and all. Like, I can’t complain.

Then there’s Manizheh. I mean, I fucking hate her. Like, I get her reasoning, but damn. I said it in my review of The Kingdom of Copper, if I had to choose between Ghassan and Manizheh, I’d choose Ghassan. I legitimately think he’s the lesser of two evils. Still a terrible, terrible choice, but I didn’t hate him the same way I hate her.

The way she treats Nahri is horrible compared to the way she treats Jamshid. When the reasoning behind that is revealed, it makes sense, and I kind of had my suspicions. Manizheh is a “at whatever cost” kind of person, and I just can’t get behind that – not with the choices she makes. I think she’s a brilliant antagonist for this series, and she kind of blindsides you with her diabolicalness. I definitely thought Ghassan was going to be the Big Bad for the whole series, that Nahri was going to Final Showdown with him.

When all the characters come together at the end for what’s really the Final Showdown, I wasn’t expecting it to play out the way it did. I thought it was so clever, so heartbreaking and such a fantastic way to do that. Without spoilers, then the book gets sad again, and my heart kept breaking. I mean, I was actually reacting and groaning and laughing as I listened. I had tears in my eyes, my lower lip legit quivered. Emotionally I couldn’t ask for more.

Daevabad is in ruins, it needs rebuilding, the whole of their magic world needs rebuilding. Nahri comes into her own, as does Ali and Dara. They’re all so wholly different than who they were six years ago when they all came into each other’s lives. I really can’t complain, but I am sad that it’s over. Binge reading this series was the best worst decision ever. Best, because oh my god, I was sleeping on these books and now I have a new favorite fantasy series. Worst because oh my god I binged them, and now what am I supposed to do without these characters?

I think S.A. Chakraborty is a phenomenal writer and storyteller and I cannot wait to see what she writes next, because I will definitely, 100% be picking it up. I do wish I’d picked up The City of Brass when it first came out, but I’m just glad that I gave it a chance and fell in love with it.

If you’re on the fence about whether or not you should read these books, I highly recommend you do. The Audible Audiobook is fantastic, the book is fantastic, you can’t go wrong. I don’t know what I’m going to do now that I’m done, but phew, so good. So, incredibly good.

One thought on “Book Review: The Empire of Gold (The Daevabad Trilogy #3)”