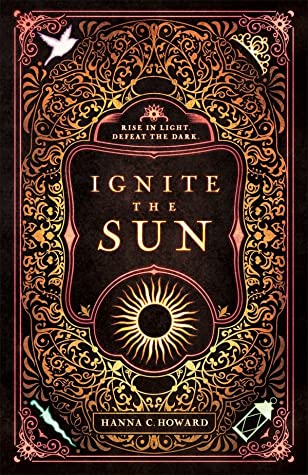 Once upon a time, there was something called the sun… In a kingdom ruled by an evil witch, the sun is just part of a legend about light-filled days of old. Luckily for everybody in the kingdom, Siria Nightingale is headed to the heart of the darkness to try and restore the light–or she will lose everything trying.

Sixteen year-old Siria Nightingale has never seen the sun. The light is dangerous, according to Queen Iyzabel, an evil witch who has shrouded the kingdom in shadow.

Siria has always hated the darkness and revels in the stories of the light-filled old days that she hears from her best friend and his grandfather. Besides them, nobody else understands her fascination with the sun, especially not her strict and demanding parents. Siria’s need to please them is greater even than her fear of the dark. So she heads to the royal city–the very center of the darkness–for a chance at a place in Queen Iyzabel’s court.

But what Siria discovers at the Choosing Ball sends her on a quest toward the last vestiges of the sun with a ragtag group of rebels who could help her bring back the Light … or doom the kingdom to shadow forever.

This will be a spoiler free review. Thank you to NetGalley for providing a free copy in exchange for an honest review.

I wish this book had been longer or split into two.

I really liked the characters, the world, pretty much everything about it. Even though I wished it had been longer, more drawn out, the pace a little slower, the story Hanna crafted is wholly enjoyable and keeps you turning the page. If I had been able, I probably would have knocked this book out in one sitting. I was legit so invested.

I love Linden. Like, he’s probably my favorite character in this book. He’s just kind of goofy, dorky, and unapologetically himself and I love him.

I also really liked Siria. I thought her character arc was really good, but again, I wish it had been more drawn out. For having her world ripped out from under her, she handles it pretty well…she could have handled it a lot worse.

I loved the rest of their group as well!

I really don’t have any complaints with the characters or the world – which came to life in my mind. I had no problems visualizing the world Hannah created. I kind of kept picturing villages from The Witcher on Netflix, just bathed in darkness. The harshness and grittiness of that world just reminded me of this one Hanna created.

I think my biggest complaint is the pacing. It comes from a place of really enjoying this book but feeling like things were just slightly too rushed. I wanted more, I wanted to spend more time with the characters. I think Siria’s arc would have been even stronger, if there had been more time. I think her and Linden’s relationship would have been more impactful, if we’d gotten to see how conflicted she is, due to her powers. Those moment between them, where Siria denied herself Linden, in fear of hurting him, be still my beating heart. I’m 100% a sucker for those kinds of self-sacrificing moments. Not that I want them to suffer, but it adds this dramatic dynamic between the two of them and I’m here for it.

Overall, I definitely recommend this book. I don’t think it’s going to disappoint and it’s a pretty solid YA fantasy. Siria is amazing and her journey keeps you interested and rooting for her. Ignite the Sun is out August 18, so make sure you grab your copy!

One thought on “Book Review: Ignite the Sun”