I kept seeing ads for the first book in this series, so I downloaded the audiobook for the first book. I inhaled that, and promptly just downloaded the rest of the books that were available. I’m lowkey regretting my decision to inhale thee first four books in less than a week, since like, five more books are out/set to come out. So now I have to wait.

I did download the eBook for book 5, so I’ll try to read that soon, but having to wait for the others, let alone, the audiobooks, really freaking sucks.

I didn’t really know what to expect diving into this. I mean, obviously the series is a RH romance, and it’s set in an academy, so we already know I was going to enjoy it. I’m a sucker for books/series set in a school/academy. And if you’ve been around this blog for a while, you know that RH is quickly becoming something I’m reading more and more of.

Personally (for me) I find it hilarious that when reading RH books, there’s always one guy who I’m like, he’s the best one hands down, but then again, why choose just one LOL.

But there is definitely one of the guys I like way more over the other ones. 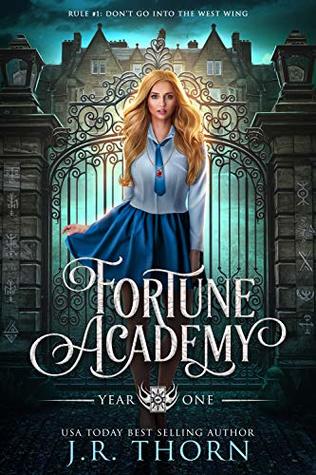 Welcome to Fortune Academy, a school where supernaturals can feel at home—except, I have no idea what the hell I am.

The last thing I remember is arriving at the massive gates with a Bounty Hunter staring me down. I have a feeling he was supposed to take me to the monster holding arena to fight and die. Instead, I’m Fortune Academy’s newest student.

I can relate to the monsters in ways the other students can’t. My mentor, who is way too hot for his own good, tells me my behavior is the result of my memory loss and that I’m just trying to identify with a past pain that I’ve buried too far to feel. I think he’s wrong. I think the reason I can’t relate to any of the students is because I’m one of the monsters they’re trained to kill.

I don’t fit into any of the supernatural cliques, but that doesn’t stop me from collecting bullies. A brawny alpha shifter, a moody dark mage, and a playboy demi-god have decided to break me. They think I don’t have any powers and that I was recruited by mistake. It’ll be their funeral if they push me too far, because this girl isn’t taking any of their shit.

My name is Lily Fallen, but don’t let my pretty face fool you. I’m a monster in a school uniform and it’s only a matter of time before I teach my bullies a lesson they won’t forget.

Since I inhaled these books, I don’t quite remember what happens in each, so I’m just going to do an overarching review of what my thoughts are of the first four books. I will say that I’m not the biggest fan of the writing style. I’m finding that the more I read these Indie/Self Pubbed (typically on KU) paranormal/supernatural fantasy books, the writing style tends to be more surface level and not very deep. I don’t mean that as an insult, but it’s just this style that I’ve noticed. It makes for really quick, and addictive reads, so I’m not complaining, but it does leave me wanting a little more depth. I feel like with this style, description and world building and character development kind of go by the wayside. That doesn’t mean that the characters aren’t good, or that the worlds don’t come to life.

It’s just not my favorite kind of writing style, but if the plot and the characters are good, then usually I can ignore it and just let myself get sucked in.

And that’s obviously what happened lol.

Like I said, I inhaled the first four books in days. I was completely invested in what was happening. I wasn’t completely loving everything, but I couldn’t stop reading. 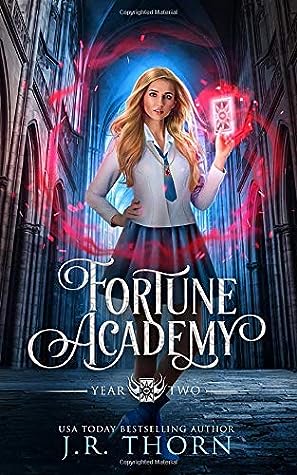 I found my five Virtues… but they didn’t want to be found.
Talk about reluctant. My five Virtues all need to be taught a lesson, even Kaito, my mentor who thinks he knows everything-FYI, he doesn’t.

Hendrik, a dark mage who thinks he’s still pulling the strings.
Logan, a wolf shifter who hasn’t caught on that I’m really his alpha.
Dante, a brutal hunter who doesn’t realize he’s the one being hunted.
Orion, a playboy demigod who hates that all he wants now is me-and no one else. He’ll be the hardest of all to break.

The tables have turned and there’s a monster loose in Fortune Academy (hell yeah, that’s me, by the way). A year has passed on the outside, but it’s only been a few short weeks for supernaturals who are ramping up for Fortune Academy’s big exam. This is a test of our fortitude and our powers unlike any we’ve had before. The Third Echo of Calamity is on its way to Earth and I need to be ready for it, which means I am going to need my Virtues on my side.
I feel them in my soul and have never been more certain of anything in my life. I’ve called my Virtues to me, whether they are ready or not.

For the most part, I liked Lily’s Virtues – but they’re incredibly manipulative towards her. There was a lot of Lily noticing and realizing that they were manipulating her, her getting angry and putting her foot down, only to basically acquiesce. It got a little old after a while – and other than the writing style, probably my biggest complaint. Lily is constantly portrayed as this bad ass, hard ass, super independent chick, but she caves to their whims all of the time and then it’s just written off as part of her nature.

I’m all for juxtaposition in characters, but it the constant repetitiveness of this dynamic was annoying. On top of that, the way she almost favors some of the Virtues over others…like, it’s just not an even playing field all around.

As for the chemistry, I really didn’t feel it – with any of the Virtues – except maybe one…but he’s introduced later. I guess her current Virtues were supposed to be Bully Romances, but I didn’t buy that either. It was all just so shallow and vapid and the reasoning behind everything just felt superficial.

But on their own, I liked the Virtues. When you look at their characters outside of Lily and her thrall over them, I enjoyed their personalities. I also think they’re more interesting that Lily. They just have better backstories and hidden histories that make them more appealing. While Lily is trying to figure out her past, everything is basically handed to her. And sure, her Virtues are some of the Top Dogs on campus and therefore have things handed to them as well, but they’re not The Chosen One. Which usually comes with a fair amount of things coming really easy to them.

But I couldn’t stop reading to find out what happens next. 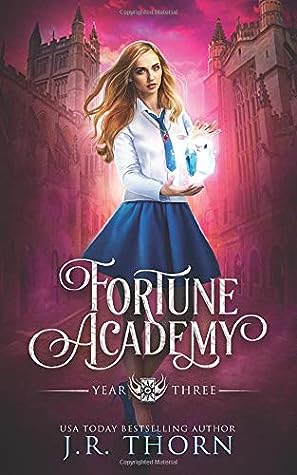 I’ve done it. My five virtues have finally accepted me and it’s better than I could have ever imagined. Hendrik, Orion, Dante, Kaito, and Logan each fill a void inside of me that I hadn’t realized had been aching.

One problem: something is still missing…
Or someone.
I sense another Virtue coming my way… and the guys are not going to like this one.

Cole is unlike any of my Virtues. He’s a monster-just like me. Abused, beaten, and downright vicious. My guys think I should chase him away, but if being a monster has taught me anything it’s that everyone has a heart. It might be cold, hardly beating, and a bit broken, but I’ll find a way to reach him… monster to monster.

The plot is definitely interesting, and it keeps getting more intense and crazier. With the introduction of a new Virtue and the world(s) going to Hell – quite literally – shit is starting to hit the fan big time. Not only has Lily just solidified her connection with her 5 Virtues, now there’s a new one and he wants nothing to do with Lily.

I was going through these books at a lightning pace. Okay, they’re not long audiobooks, but I wasn’t wasting any time. So, imagine my surprise when I find out book 5 isn’t out on audio yet. And then imagine my shock that there are like nine books set to be in this series – and the rest are set for pre-orders. So, I just inhaled 4 books in a not completed series and it was like hitting a brick wall. Suddenly cut off.

I’m not thrilled lol. Because while this isn’t the greatest series I’ve ever read, it’s kind of addicting in the best way. You just want to keep reading to find out what interesting plot elements are gonna happen next…or what nonsense. 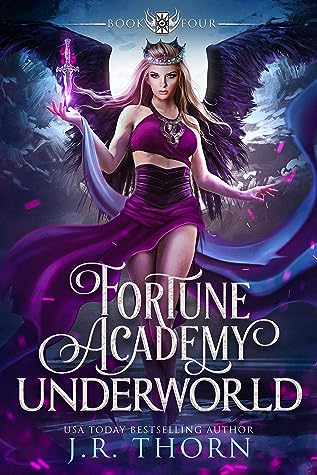 Welcome to Fortune Academy Underworld, a place where supernaturals can feel at home.
And now I know exactly what the hell I am.

I’m a tribrid. Part succubus, part Demonspawn, and part angel. I earned my wings when I made the ultimate sacrifice for my mates by dying for them. Now I’m reborn as the Princess of Hell.

Too bad that doesn’t exempt me from my classes.

Fortune Academy has changed. When the gates of Hell opened up, it merged with its counterpart and became something new. We’re building an army to fight Lucifer, but all the supernaturals flooding through the iron gates are lost, confused, and in desperate need of training.

Especially Cole, my latest Virtue who refuses to get in line.

He’s misguided, lost, and has an eternity of bad behavior that’ll need to be undone. But I’m reaching him, I just hope I don’t lose myself in the process.

Well, the ending to book 3 leaves you in need of resolution and answers, and book 4 delivers. Cole is a much more permanent figure, and Lily’s world has changed once again from what she knew it to be.

See, I told you. It’s a wild ride that keeps you engaged and wanting to know what happens next. I mean, legit so much changed between the last book and the fourth one. More and more comes to light about who Lily is and what she past was. Whereas things were good between her and her Virtues, things are stressed, strained and at a breaking point. I spent a lot of this book wanting to hug Logan and Orion. Legit I started not to care about the other Virtues. Out of all of them, they manipulate Lily the most and I was growing tired of it. Still like them as characters, because they’re still interesting, but with their roles as Virtues, I couldn’t have cared less.

Logan and Orion though, they’re cocky, but give off Cinnamon Roll vibes.

The only outlier is still Cole, and the enemies to lovers thing that he and Lily has is like crack – I’m trash for it.

It’s definitely a series that is easily bingeable – and that’s probably the best way to do this series – or any series like this. Just inhale it in one go. I’m really annoyed I have to wait for the rest of the books to come out – and then wait for the audiobooks. I’ve downloaded the ebook for book 5, but I really might just now wait for it all to hit audio.

If you like academy set books, and/or RH, then maybe check this out. It’s mindless at worst and fantastic at best – depending on how you feel. But regardless, on some level, you’ll enjoy it.