I loved this trilogy so much.

I need physical copies for my shelves.

I was actually quite pleasantly surprised by these books. Princess Ballot has been on my TBR for quite a while now, and I finally dove in. I saw that a fellow reader had recently read this and had given it a pretty high rating. Pairing that with I’m in a weird reading mood, I dove in. I went and downloaded the audiobook despite having a bunch already in my library waiting for me.

Then I promptly inhaled all three books and spiraled a bit.

*This is book one in a dark college romance. This is not a RH or traditional love triangle story, but it does include a-hole princes, nasty princesses, and one chick who will take none of their shit, all the while doing her best to make it out alive. HEA guaranteed. Eventually.

Not going to lie, I was expecting a typical NA college “bully” romance but make it Royal. But y’all, it was so much better. If we’re ticking boxes, then boxes were fucking ticked.

I mean, it’s pretty much got everything. Including fantastic characters. The only thing I really wasn’t a fan of was the “dirty talk” during the spicy scenes. It just sounded corny…cringey. Like, it made me want to laugh. But who am I to judge lol. It didn’t wreck the books for me, and I’m still 100% recommending them. 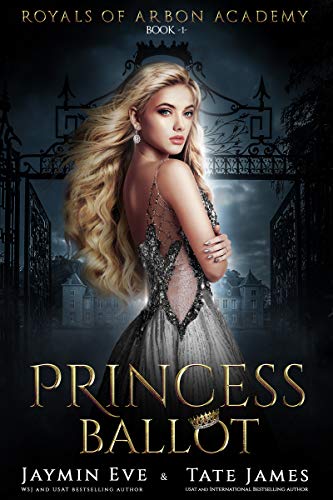 You have been chosen.
Those four words change Violet Spencer’s whole life, when against staggering odds, she’s selected in the “princess ballot.”

Arbon Academy is affectionately known as the school for Royals. Only the rich, powerful, or heir to a throne gain entry … except for the one scholarship student accepted every five years. It’s a worldwide lottery, and one that Violet entered without giving it any serious thought.
But the media got it wrong and Arbon Academy is much more than a simple college for future leaders.
It’s a dark world of politics, intrigue, and dangerous guys who will stop at nothing to get their own way. Despite her best efforts at remaining off the radar, Violet finds herself a pawn between two of the most powerful monarchies in the world.
Prince Rafe of the Switzerlands and Prince Alex of the Australasias are bitter enemies both on the soccer field and in the political arena. Monarchies rule the world now, and every waking breath is a competition for the princes.

Whether it’s through love or hate, someone will ultimately win.

When I say I kind of lost my shit when I realized this wasn’t just a typical contemporary romance with slight fantastical-esque elements, but like, a full-on dystopian novel. 27-year-old me was thrown right back to 2012 dystopian era and I was living. I mean, I honestly couldn’t ask for a better series that was seemingly tailored to what I love reading. Like, I want to throw these books at you and make you read them.

If you’re missing the glory days of YA Dystopian books, but also want a little spice, some playboy princes and a college setting – go pick this up right now.

I know, it seems like a bit of a strange mix, but omfg it works.

Violet is a really fun character. She’s a bit stereotypical when we first meet her, but she’s clearly got hidden depths. I really loved that she didn’t put up with any shit. She had a plan and while she gets points for trying to stick with it, I’m glad things turned out the way they did. She’s a pretty awesome badass, and really pushes the mold of who typically attends Arbon Academy.

I also really loved that Arbon Academy, while elitist and snobbish at the best of times (dark, twisted and cruel at the worst) wasn’t just this automatic place that alienated Violet. While she was clearly different than those around her, she wasn’t immediately ostracized to the bottom rungs. That some of the first faces she meets, don’t immediately try to break her down.

Let’s be real – typically in these kinds of stories, the MC is usually “different” and therefore needs to be taught her place, and incessantly bullying starts up. People just tend to hate her because she’s not rich, or whatever classification they’re judging on.

Violet isn’t spared the crude remarks, the mean stares and outright verbal abuse, but she’s been through worse, and knows how to dish it back. She’s not immune to the petty meanness, but she doesn’t let it break her.

And before I get into the love interests and the best friends – let’s just talk about the setting & world real quick.

I’m sure you’re all aware by this point that I’m an absolute sucker for SF Dystopian. Like, it’s one of my favorite genres and stories where the world as we know it has ended, and a new way of life has to emerge is like my kryptonite. Like, I can’t get enough. I will forever love books where the world has ended, and people do whatever the fuck they have to, to survive.

Well, this series is like, what happens a step past the initial breakdown of society. The world ended, and moved on, but also kind of regressed. The idea that country lines shifted and combined, and monarchy’s now rule over the entirety of the world – let’s just say, I’m here for it. It’s an interesting take on Allied and Axis powers and a cool take on a way that humanity might survive something cataclysmic.

But again, when it comes to SF/Dystopian, I feel so deprived of it in books, I’ll take whatever I can get. I did really love this concept in the book. Some of the finer points are a little iffy – especially when we start getting into certain character backstories, but I’m just here for a good time. And I had a fantastic fucking time with this trilogy.

As for the school – we also know that I’m trash for a college/campus/university setting. There’s just something so enticing about it. Coming from someone who had zero desire to live on campus when going to college – maybe this is my way of living vicariously, idk. But I love it. You give me a series that takes place on a campus, I’m probably going to want to read it. 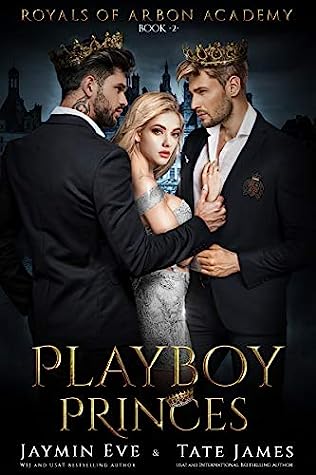 She’s my last chance.
Those four words echo in Violet Spencer’s mind, tugging at her curiosity even as rage builds within her.

Arbon Academy was supposed to be a bright new start. An opportunity for greatness, and something an orphan girl could only dream of. For a while there, it seemed to be exactly that.
But Violet’s bright future is suddenly looking dim. Arbon Academy and Prince Alex are nothing but a facade. A trap.
In a sinister world of ballgowns and backstabbing, of perfumes and politics, of indulgent parties and illegal sword fights, Violet now faces the biggest challenge of all. Recovering her shattered heart from the prince who crushed it.
Supported by her new friends, Violet wants to make Alex feel the pain of his betrayal. Prince Rafe wants nothing more than to help make that happen, but things aren’t always so straightforward.

These rules will keep Violet alive. But at what cost?

But enough about the world and the setting.

I’m sure you want to know about the love interests.

There are 3, but this isn’t a Reverse Harem. One is a bit of a bully romance, one is pure soft cinnamon roll and the other is…well that’s a spoiler. You’ll have to read the books to find out what Prince Alex is.

There’s also a set of Twins who are the highlight of any party. The dynamic between the two of them is so good, and I love how they just adopt Violet. Mattie is a little convenient and a bit predictable, but I enjoyed her character. She goes through some growth over the course of the series. And Nolan is just a goof. Straight up. He’s a shameless flirt and is always down for a good time. He treats Violet like a sister – though, he does hit on her a bit.

No, I’m not kidding.

Though, Jordan has a bit of a darker side, so pairing that with his Golden Retriever, cinnamon roll status is a really fun personality. Alex is…well, he reminds me a lot of another golden hair love interest. Real shiny on the outside…not so shiny on the inside. But Rafe, mister “I want to fuck you so badly, therefore I’ll be an asshole to repress my feelings” – phew. He’s definitely an asshole, a dick and not at all nice to Violet – but the tension…the sexual tension.

In the second book, things are starting to pick up. More about Violet’s past is coming to light. The darker, more insidious side to Arbon is coming out, as well as the rules for how the world is run. Rose colored glasses are coming off, and things aren’t looking great. It’s intense and wild and wholly addicting. This is where it starts truly becoming a SF Dystopian book and I was 100% here for it. 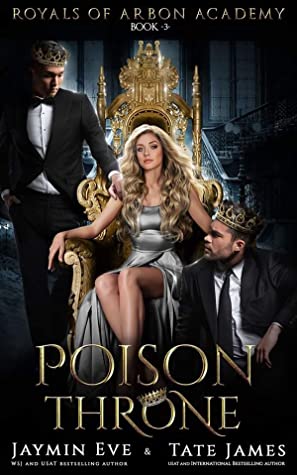 They’re waiting for you.

Those four words should have been a warning. They should have filled Violet with dread. But she was so focused on Rafe’s disappearance, she forgot.
The resistance was supposed to be fighting for a better world. A group of freedom fighters formed during the Monarch War, pushing back against laws that would see everyone enslaved. For a while there, they gave hope.
But with power comes corruption. The Society has been quietly amassing the strength and backing to become a real threat, and not everyone wants to use that power for good.

In a world torn apart by the death of monarchs, new leaders rise. Violet dives headfirst into the viper’s nest with one singular goal: rescue the stolen prince who possesses half her heart.
With the unwavering support of Jordan at her side, Violet knows she can face whatever the resistance throws at them. Even if she was the intended target all along.

Keep your friends close.
Keep your enemies closer.
Never forget the betrayals of the past.

The end of an era is here.

When I say that this book made my SF/Dystopian loving heart so happy…I mean it.

Violet is a badass.

Rafe is a badass.

Jordan is still a Cinnamon Roll and should be protected and hugged at all costs.

But remember that darker streak I mentioned??

Jordan could rival Rafe with that wicked gleam in the eyes, and the possessiveness.

Fuck, can I have a Jordan? Please?

The chemistry between Violet and the two guys is so good. I love that they balance each other out. Rafe and Violet would burn too hot and too bright, but add Jordan into the mix, and the heat is tempered to a more manageable level. It’s perfect.

I do wish the ending had been a little different – or maybe not different, but I felt like it was lacking a little bit. Maybe I was just sad that the trilogy was over, but I wanted more. I was left feeling a little unfulfilled. There was also one element done to Violet’s character that I wasn’t that big of a fan of. Like, I understand it, but it kind of felt like it was pulled out of left field. I just can’t imagine that the other party involved would have meant to do that. It felt like it was supposed to be purposeful, but it came across as dumb luck, and I didn’t like that.

I would definitely read more in this world if the authors were to ever write more. Idk what the books would be about but bring it.

I’m so glad I read this series, and I’m thrilled that it surprised me – that it exceeded my expectations.